This talk was originally delivered at the NOBTS Defend’20 apologetics conference. All slides can be found here. 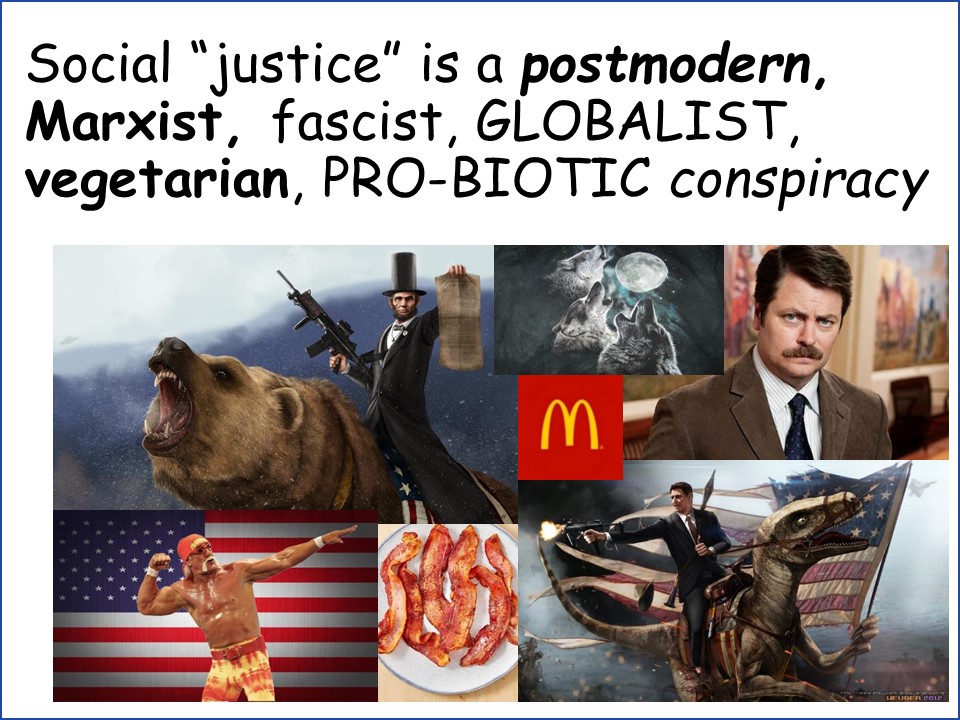 When I give this talk, many people expect me to begin with a slide like this: “Social ‘justice’ is a postmodern Marxist, fascist, GLOBALIST, vegetarian, pro-biotic conspiracy that’s the biggest threat to democracy since the metric system.” Well, that’s not why I’m here. I’m not trying to tell you how to vote. For the purposes of this talk, I don’t care whether you want to universalize health care or open the borders or restore the monarchy and bring King George back from the dead. My concerns today are not political; they’re theological.

Second, in 2016, there was a horrific terrorist attack at the Pulse nightclub in Orlando. The shooter swore allegiance to the Islamic State before killing around 50 people. In response, a major activist organization wrote an open letter, now taken down, which stated: “The enemy is now and has always been the four threats of white supremacy, patriarchy, capitalism, and militarism.” That seems like an odd response. What does capitalism or the patriarchy have to do with an Islamic terrorist shooting up a gay nightclub?

Third, here’s the abstract from a peer-reviewed paper on feminist glaciology; “glaciology” is the study of glaciers. The authors argue that if we incorporate gender into our study of glaciers, it will lead to “more just and equitable science and human-ice interactions.”

I. Why should we care?

But does any of this really matter? Perhaps there are some weird ideas floating around out there in the culture, but why should that affect us as Christians?

Well, first, if we’re going to reach people, we need to understand the ideas that people are embracing outside the church, so that we can preach the gospel effectively. But second, these ideas are not just ‘out there’ in the culture; they’re also finding their way into the evangelical church, and that’s how I became interested in this subject.

Several years ago, I noticed a theological drift in some evangelical Christians, both in people I knew personally and in public figures. The drift often began with an interest in social justice, which I assumed meant applying biblical principles to our laws and institutions. And that’s a good thing. But then these same individuals began expressing other ideas that were harder and harder to reconcile with orthodoxy. Sometimes, they left the Christian faith altogether. I saw this process play out repeatedly and I couldn’t understand the connection. How do you go from saying “sexism is a sin” to saying “Christianity is just one of many paths to God”?

I was still trying to understand how people moved from point A to point B when I read the book Race, Class, and Gender, a 500-page anthology of writings touching on topics as diverse as Marxism, feminism, critical race theory, and queer theory. Everything suddenly made sense. People were not merely adopting a few new beliefs about politics; they were adopting a new worldview, which was gradually eroding their Christian worldview. That’s why I’m concerned. I see more and more Christians, especially young Christians, following a similar path today and I want to prevent that.

Next: Part II – What is Critical Theory?