Sim and Van Loon’s Introducing Critical Theory: A Graphic Guide provides an extremely condensed overview of the various ‘critical theories’ that developed over the course of the 19th and 20th centuries, starting with Karl Marx. 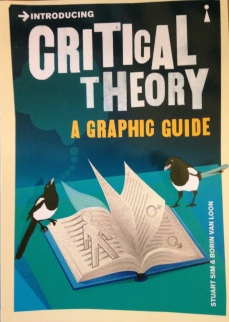 In keeping with the “Graphic Guide” series, cartoons are used to memorably depict prominent critical theorists and their ideas. This format is both the book’s greatest strength and its greatest weakness; comical illustrations make the text more accessible to casual readers but also render it far less likely to be taken seriously. That’s unfortunate, because, in terms of information, the book is quite helpful.

Introducing Critical Theory begins with Marxism, which most scholars agree was the first identifiable ‘critical theory.’ Sim and Van Loon explain that Marx’s goal was to produce a “grand narrative” that would show how societies and culture work. But in contrast to traditional theory, the goal of “critical theory” is not merely to describe, but to transform: “From Marxism onwards, critical theory has been very closely linked to political positions… Being critical is being political” (p. 5). In particular, the authors note that “One criticism levelled against critical theory says that it is an ‘alternative metaphysics’, promoting a particular worldview, and, at least implicitly, a particular politics.” However, they accept this charge and add “There is nothing wrong with such a procedure, as long as it is made clear what that metaphysics entails.” (p. 5)

One of the features that distinguishes Marx’s philosophy as a form of critical theory is his emphasis on ‘ideology’ or “ways of thinking characteristic of class behavior (what we ‘take for granted’ as natural)” (p. 21). This desire to get “below the surface” and unmask hidden, unquestioned ideologies is a hallmark of critical theory: “Once again, we notice Marx’s critical insistence of the hidden: religion, politics, law, etc. – everything cultural that we ‘live by’ – disguises and renders perfectly natural an economic means of production that is unnatural” (p. 21). Similarly, Marxian analysis “shaped critical theory to “‘search below the surface’ of texts” (p. 21) rather than accepting them at face value.

Another key contribution to critical theory was made by Antonio Gramsci who argued that the ruling class maintains its control and oppression over the working class through its hegemonic power, its ability to impose its norms and values on culture: “[Gramsci believed that] Marxism had failed to consider how ideology actually works to make itself unrecognizable as such (another “disguise”). This is the trick of hegemony… to persuade the whole of society that a prevailing ideology – the very one which in fact protects the dominant class – is really the only natural and normal way of thinking” (p. 37). Note that Marx and Gramsci’s writings are both considered to be central to critical theory, despite the fact that the term “critical theory” was introduced by the Frankfurt School in the 1930s.

The Frankfurt School, which included scholars like Max Horkheimer and Herbert Marcuse, picked up on themes of oppression and liberation to explain how Western societies continued to effect “repression” through ideologies. They believed that “political oppression in the Soviet Union is matched by the oppressive practices of the ‘culture industry’ in the West, particularly America… Western populations are in effect programmed to think, and consume, in the way that its capitalist rulers dictate” (p. 41).

Poststructuralism also played a crucial role in the development of critical theory. In particular, the authors’ discussion of Michel Foucault’s contribution was fascinating. Foucault “deepened Gramsci’s inquiry into the problem of hegemony [by studying] the hegemonic factor of power in creating and maintaining social systems.” For Foucault, “The creation of such [social] systems implied the marginalization and exclusion of certain vulnerable social groups in the name of ‘order’.” For example, Foucault argued that societies’ treatment of the mentally ill, criminals, the physically ill, and homosexuals were all forms of “social control” (p. 92). Homosexuality was outlawed in the West because “a ‘normative’ pattern of human behavior had to be established in order to eradicate ‘difference’, since that came to be regarded a a potentially subversive element of society. Heterosexuality became the norm… with all other forms of sexual expression being treated as deviations from that norm” (p. 93). Because of this belief, Foucault “continued to campaign for marginalized social groups -homosexuals, prisoners, and ethnic minorities, for example – until the very end of his life” (p. 93).

The authors connect several other notable social movements to critical theory, including post/anti-colonialism, feminism, and queer theory. Relevant quotes: “The American-Palestinian critic Edward Said’s (b. 1935) Orientalism (1978) gave impetus to the development of postcolonialism as a significant area of critical theory in its own right” (p. 136). “[Frantz] Fanon’s Black Skin, White Masks (1952) explored the ways in which the black colonized races internalized the ideas of their white colonizers” (p. 138). “Feminism has exerted enormous influence on critical theory. It has demonstrated a well-honed ability to absorb what it wants from a whole range of other theories – Marxism, deconstruction, postmodernism, etc. – while still pursuing a clearly-defined agenda of its own [such as] the nature and mechanisms of male oppression [and] the nature of female experience under these mechanisms” (p. 141). “Queer theory… is a late 20th-century development in the field of critical theory [which] attempts to ‘destabilize the entire system of sex regulation’, and ‘binary oppositions such as gay/straight’” (p. 158).

I found Sim and Van Loon’s excursion into the literary, linguistic, and psychological applications of critical theory to be less interesting, although they are unsurprising given Sim’s position as a professor of English Studies. At the very least, the fact that the works of playwright Bertolt Brecht, philosopher Louis Althusser, and psychologist Jacques Lacan can all be related to the project of “critical theory” shows the breadth of its impact and influence.

In summary, the book provides a good rough sketch of the development of critical theory/critical theories over the last century-and-a-half. While its presentation might be off-putting to some, the content is valuable.