Having described critical theory and identified several of its strengths, let’s look at some of the conflicts between Christianity and contemporary critical theory. 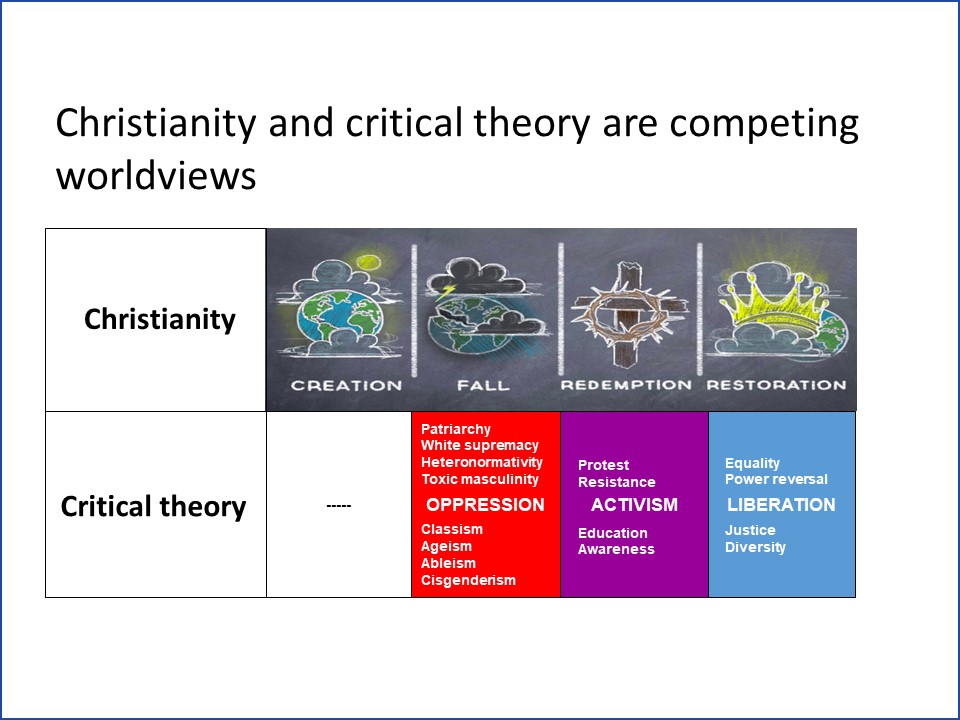 Christianity is one such worldview. Christianity tells one comprehensive, overarching narrative about reality in four basic acts: creation, fall, redemption, and restoration. Who are we? We are the creatures of a holy, good, and loving Creator God.  What is our fundamental problem as human beings? We have rebelled against God. What is the solution to our problem? God sent Jesus to bear the penalty of our rebellion and rescue us. What is our primary moral duty? To love God. What is our purpose in life? To glorify God. This is the basic story that Christianity tells us and is the grid through which we ought to interpret everything else.

Critical theory also functions as a worldview.  But it tells a different comprehensive, overarching story about reality. The story of critical theory begins not with creation, but with oppression. The omission of a creation element is very important because it changes our answer to the question: “who are we?” There is no transcendent Creator who has a purpose and a design for our lives and our identities. We don’t primarily exist in relation to God, but in relation to other people and to other groups.  Our identity is not defined primarily in terms of who we are as God’s creatures. Instead, we define ourselves in terms of race, class, sexuality, and gender identity. Oppression, not sin, is our fundamental problem. What is the solution? Activism. Changing structures. Raising awareness. We work to overthrow and dismantle hegemonic power. That is our primary moral duty. What is our purpose in life? To work for the liberation of all oppressed groups so that we can achieve a state of equity.

Critical theory and Christianity answer our most fundamental questions about reality in very different ways. I worry that too many people are trying to hold on to both Christianity and critical theory. That’s not going to work in the long run. We’ll constantly be forced to choose between them in terms of values, priorities, and ethics. As we absorb the assumptions of critical theory, we will find that they inevitably erode core biblical truths.

To provide just one illustration, on Sept. 5, 2018, Union Theological Seminary posted a Twitter thread in response to the Statement on Social Justice and the Gospel. Their very first statement was “we deny the Bible is inerrant or infallible” because it “reflects both God’s truth and human sin & prejudice.”  But how do you determine which is which? They explain: “biblical scholarship and critical theory help us to discern which messages are God’s.”  I commend them for their clarity here, but it shows exactly how critical theory strives with Christianity for pre-eminence. These are two worldviews fighting. In the end, one will win.

Second, there is a difference in epistemology, that is, how we know the truth.

Critical theory often takes an approach to truth claims that is in conflict with Christianity. Normally, when someone makes a claim about what is true, we require the claim to be supported by reason, logic, and argument. We test that claim against the available evidence to determine whether it is true.

However, critical theory encourages an alternate approach to truth claims that is very popular but is logically invalid. Because of the idea that truth claims are really veiled bids for power, when someone makes a truth claim, the first question asked is not “is this claim true?” but “What incentives does this person have to make this claim? What social or political agenda motivates this statement? How does this statement function to preserve his power and privilege?” If you’re familiar with the work of C.S. Lewis, you’ll recognize the logical fallacy that he christened ‘Bulverism.’ Bulverism is a species of genetic fallacy; it dismisses a claim as false because of the assumed motives of the person making the claim. In the same way, critical theory bypasses the question of whether the claim is true and focuses the discussion on the claimant’s group identity. 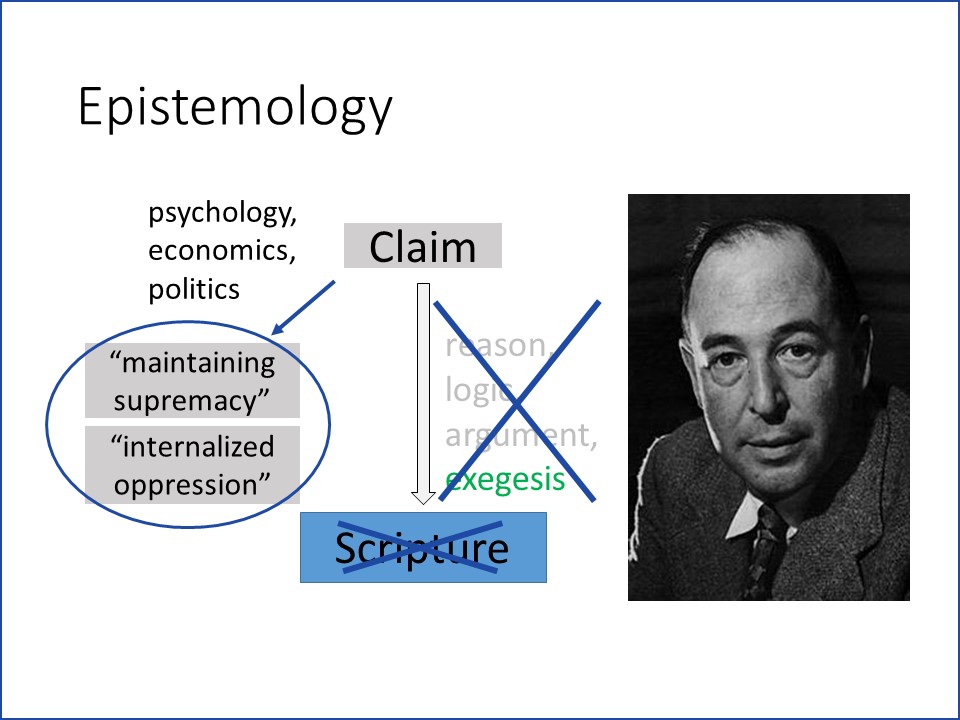 Even if we grant that this approach to truth is a problem, is it really one of the most dangerous conflicts between critical theory and Christianity? Yes, because it undermines any appeal to the Bible. One of the driving forces behind the Reformation was the idea that our theology has to be reformed to and brought under the authority of Scripture. To do that, we need to be able to test theological claims against the Bible. Unfortunately, critical theory short-circuits this process.

Third, critical theory assumes an adversarial relationship between individuals that is profoundly antithetical to Christianity. Critical theory depends crucially on differentiating identity groups into ‘oppressor’ and ‘oppressed.’ Conversely, if all human beings shared some fundamental identity marker, that fact would severely undermine the dichotomy between oppressor and oppressed and would call into question the foundations of critical theory. Yet Christianity offers not just one but three of these fundamental identity markers, which are shared by human beings across lines of race, class, and gender. 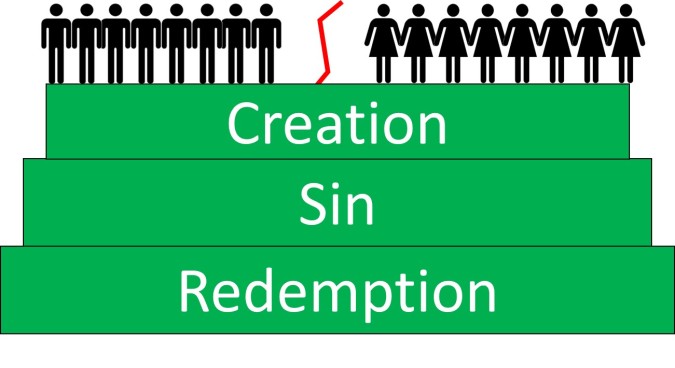 For example, after the NYTimes hired columnist Sarah Jeong, numerous Tweets surfaced showed her making derogatory comments about whites. I won’t read them aloud because they’re pretty vile, but obviously, this kind of language would be seen as horrifically racist if it were applied to any demographic group other than ‘white people’ or ‘white men.’ Yet many people defended these Tweets.  On what grounds?

This insistence that individuals from different demographic groups should be held to different moral standards purely on the basis of their group identity is deeply unbiblical. Sin is not rooted in power dynamics; instead, it is rooted in the violation of God’s commands in thought, word, or deed.