The title of my talk today is “The gospel as apologetic: the central message of Christianity as evidence of its truth.” I’m going to argue that the basic gospel message –the good news that Jesus died for our sins and rose from the dead for our justification- is itself evidence that Christianity is true. That claim probably comes as quite a shock to most of us. We normally think that the apologist’s job is to clear away intellectual objections and to offer positive evidence for the truth of Christianity so that we can then present the gospel. In contrast, I’m going to argue that the gospel itself is an apologetic –in fact, the best apologetic- for the truth of Christianity.

I’ll start with the argument’s motivation and structure: what good is this argument from the gospel? What does it do? Why do we need it? I’ll then outline the structure of the argument. I’ve put the argument into deductive form with four premises and a conclusion. The first premise is intuitive and not very controversial. I’ll mention it, but I’ll spend the bulk of the talk defending the other three premises. Once I’ve done that, I’ll present conclusions and I’ll return to the three questions with which we opened the talk.

The apologetics endeavor has two main tasks: evangelism and discipleship. First, apologetics can be directed towards non-Christians. Our goal here is to show that Christianity is true so that people can put their trust in Jesus as Lord and Savior. We see Paul using apologetics to non-Christians in Acts 17 on Mars Hill or in Acts 26, before King Agrippa. Second, apologetics can be directed towards Christians. Here, our goal is to give people confidence that what they believe is true. We see exactly this motivation in Luke 1:1-4 where Luke writes that he wants to give Theophilus “certainty about the things he has been taught.”

As Christians, we have a wealth of resources at our disposal for engaging in these two tasks and you’ll hear about many of them this week. We can employ the moral argument, or the Kalam cosmological argument, or the argument from fine-tuning. We can outline the historical evidence for the Resurrection. All of these arguments can give us tremendous confidence that Christianity is true and can convince non-Christians that they need to take the claims of Jesus seriously. But there’s a problem. The vast majority of Christians don’t have access to these resources. In fact, I suspect that the majority of Christians don’t even know what apologetics is.

That’s a good question. How do we answer it? There are several approaches.

First, we could just take an approach that I call ‘hard evidentialism.’ We could bite the bullet and reply “That’s right. The vast majority of Christians are not justified in their belief that Christianity is true because they don’t have sufficient evidence. If they were purely rational, they wouldn’t be Christians at all.” Yikes. That seems a bit extreme. We’re essentially throwing millions Christians under the bus. That’s not very appealing. What are our other options?

Second, we could appeal to Calvin’s sensus divinitatis, the idea that all people have an innate sense of God’s existence, independent of any appeal to evidence. However, that only gets us to God, not to Christianity. Consequently, it can’t answer the question of how specifically Christian belief is justified.

Third, we could move to personal testimony. Certainly, if you’re a child, you’re fully justified in believing the testimony of a trusted authority figure like your father or mother, so the beliefs of children can be justified in this way. But what if you’re an adult living in a secular society where most of the otherwise trustworthy authorities are not Christian? What if you’re a villager from an unreached people group who encounters a missionary? How do you know that the Christian missionary is trustworthy as opposed to the Muslim missionary or the Mormon missionary?

None of these responses seems to be satisfactory. However, the next few responses are better.

Fourth, we could appeal to miracles to justify Christian belief. This approach seems more promising and it’s certainly biblical. Jesus and the apostles authenticated their message with miraculous signs. However, not all preaching is accompanied by miracles, so miracles can’t be used to justify all Christian belief.

Fifth, we could appeal to religious experiences such as dreams and visions or answered prayer. That approach is also promising. My father-in-law is a missionary to Muslims and he says that one of the three main ways that Muslims are led to Christ is through dreams and visions. Certainly, if God sends someone a dream or a vision, that could justify their trust in the gospel. But what if he doesn’t? Again, there’s a gap.

Sixth, we could draw upon the concept of the “inner witness of the Holy Spirit.” We could argue that when we hear the gospel preached or when we read the Bible, the Holy Spirit illuminates our hearts so that we simply and immediately perceive that it’s true.

Although I agree wholeheartedly with this idea theologically and will draw on it at the end of my argument, it’s not ideal because it doesn’t furnish us with a rational argument that we can communicate to other people. What exactly separates the “inner witness of the Holy Spirit” which Christians experience from the ‘burning in the bosom’ that Mormons experience? To an outsider, they appear to be exactly the same. Even though Christian belief is justified by the inner witness of the Holy Spirit, a non-Christian can’t know that it is justified.

Even when we combine all of these approaches, there seems to be a real gap. How can we show that the belief of the average Christian is justified? What supplies the warrant? And how do we communicate that warrant to non-Christians? That’s the gap. Today, I’m going to suggest that the Argument from the Gospel fills this gap.

Second, I’m going to claim that all Christians already do possess justification for their beliefs through the Argument from the Gospel. In other words, Christians are justified in their belief in the truth of Christianity because they’re implicitly relying on this argument even if they can’t articulate it explicitly.

Finally, the argument from the gospel can be used to show non-Christians that Christians are rationally justified in their belief.

Are you intrigued? Skeptical? Let’s take a look at the argument. 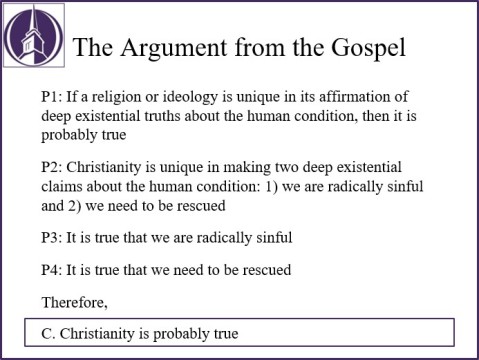 At its root, the Argument from the Gospel is an abductive argument; I’m arguing that the truth of Christianity is an ‘inference to the best explanation’ based on several pieces of evidence. However, I’ve cast the argument into a deductive form to make it easier to follow.

Premise 1 reads “If a religion or ideology is unique in its affirmation of deep existential truths about the human condition, then it is probably true.” This is the abductive premise which argues that Christianity is probably true based on some set of evidence. There are two important points to notice.

First, the religion or ideology in question has to be unique with respect to particular claims. If many religions affirm the same truths, then we won’t be able to differentiate between them using this argument.

Second, these truths should address deep existential realities, pressing questions about human existence that we can’t escape. A religion or a worldview can’t simply be unique in telling us that there are an even number of planets in our solar system or an odd number of stars in the Milky Way. That might be true, but it’s not particularly important. Religions are supposed to answer our deepest questions about reality. A religion could be deeply wrong about these central questions but could still be accidentally right about something irrelevant.

On the other hand, if a particular religion answers these central religious questions uniquely and the answers are true, that’s surprising. It’s still possible that the religion is correct about these core truths right by some extraordinary coincidence, but it seems much more likely that the religion gets these truths uniquely right because the religion itself is uniquely true.  Consequently, premise 1 is very reasonable. The next three premises are more controversial.

Premise 2: Christianity is unique in making two deep existential claims about the human condition: 1) we are radically sinful and 2) we need to be rescued. That’s an empirical claim which we’ll have to defend. And it’s followed by two other premises that we’ll have to defend:

Premise 3: It is true that we are radically sinful.

Premise 4: It is true that we need to be rescued.

If we can defend all four of these premises successfully, then the conclusion that “Christianity is probably true” follows logically from the premises.

I’ll defend premises 2 through 4 in the remainder of the talk, but before I do, let me provide an illustration that will explain the structure of this argument.

Imagine that I’m playing pick-up basketball and I suddenly collapse on the court. People rush over to see what’s wrong. One of them says “It’s ok. You just twisted your ankle. Get up and walk it off; you’ll be fine in five minutes.” Another says: “No, it might be sprained. I’ll get you an ACE bandage from my car.” Another says: “Actually, you probably need some Advil. There’s a pharmacy across the street and I can pick some up.”

But suddenly, a woman rushes over and shouts: “Listen I’m a doctor. I saw what happened. We need to get this man to a hospital immediately. His life is in danger. Call an ambulance. This man can’t feel his legs and he can’t move.” Everyone in the crowd is incredulous. They insist that she’s overreacting. They doubt her credentials. They think her claims are ridiculous. But I believe her and I ask to be taken to a hospital immediately. Why? Because I know two things that the crowd doesn’t know: I can’t feel my legs and I can’t move. Somehow, she was the only person in the crowd to know these two extremely relevant facts. I had awareness of and immediate access to my true condition, even though no one else did. That’s why I’m fully justified in trusting her.

Having explained the argument and its basic structure, let’s turn to premise 2: is Christianity really unique in affirming that we are all radically sinful and that we are in radical need of a savior?

Next: Part 2 – Is Christianity unique?