Even if reflection on the tragic, destructive path of human history and careful introspection convinces us that human beings are radically corrupt, is there a reason to accept the idea that we need rescue?  While they don’t identify our fundamental problem in quite the same way as Christianity, other worldviews and religions offer alternative solutions that sound quite reasonable. Secular philosophies say that we can solve our problems through better education, through a different form of government, through income redistribution, through a return to traditional values, through social activism, or through therapy. Other religions say that we can solve our problems through good deeds, through morality, through obedience to God’s law, through prayers, through meditation, through rituals, or through ascetic practices. From a Christian perspective, many of these suggestions would certainly improve the world we live in.  So why think that the Christian solution offers something distinct and necessary?

In spite of the vast differences, all of the prescriptions listed above have one thing in common: they all assume that we can fix ourselves. Christianity alone claims that what we need most is a Savior, a rescuer, someone who will do for us what we cannot do for ourselves. Just as the biblical authors declare our desperate moral guilt, they also declare the gracious forgiveness that God has provided.

But do we have objective reasons to think that we need a rescue that comes to us freely and entirely unmerited from the outside?

I believe that we do.

First, the Bible understands sin primarily as a transgression of God’s commands, breaking God’s law. This is the way that most people understand sin: as a violation of God’s rules. That’s correct. We find that view expressed in both the Old and New Testaments. However, people fail to connect this conception of sin to the idea that we need rescue. 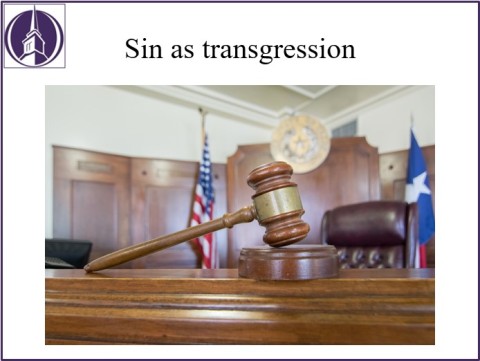 For example, let’s imagine that you’ve broken some incredibly serious law; for example, you’ve murdered a six-year-old girl. The police come to your house and arrest you and you’re brought before the judge. Here’s your defense: “Your honor, I fully admit that I committed the pre-meditated of that little girl and that this crime is a capital offense. However, I brought you a list of all the community organizations that I’m a part of, along with a list of my charitable donations and the hours I’ve volunteered at church. I’m sure that when you total up all of the positive things I’ve done, they will more than offset this one violation of the law.” Is that how the law actually works? Seriously?

The situation is even more dire if we consider the moral perspective. What would you think of the defendant after he made that little speech? Would he have proved that he’s deserving of leniency? No! Exactly the opposite. He would be even more deserving of punishment because he’s shown that he still doesn’t recognize the gravity and repugnance of what he’s done.

Yet amazingly, this is how we think we can approach the God of the universe after a lifetime of breaking his laws. Our guilt is not confined to one or two unintentional slip-ups, but 70 or 80 years of daily, perpetual, habitual defiance of his commandments. Yet we think we can walk into the divine courtroom, pull out our organ donor card and earn a spot in his kingdom. That’s insanity.

Second, the Bible describes sin through the metaphor of slavery. We are not just guilty criminals, we are corrupted slaves. Our evil desires have taken us captive. In one sense, we sin freely because we are acting out of our own desires. But in another sense, we are slaves to these evil desires.

In modern terminology, we might substitute the word ‘addiction’ for ‘slavery.’  An addiction is any destructive habit which we are powerless to stop and which controls our lives.  The addict may be in denial and may insist that he can stop at any time.  Or he may know that the addiction is destroying his life and is literally killing him.  Either way, the addiction is his master and he is its slave.  We see these signs so clearly when the addiction is to drugs or to alcohol.  But what if the addiction is to sin?

Suppose someone offered us $1,000,000 to live perfectly according to the interpersonal ethical standards of the Bible for just one month. We wouldn’t be required to live according to the ‘greatest commandment’ to love God with our whole heart, but only according to the commands pertaining to other human beings. Naturally, certain behaviors would have to be avoided: no watching pornography, lying, gossiping, extramarital sex, or dishonesty.  But even our patterns of thought would have to change: no more greed, lust, self-righteousness, boasting, envy, and pride.  How long before our first lustful thought? How long before we snap at one of our children, or our spouse, or our co-worker?  How long before we begin feeling superior to all the people who aren’t even trying to obey God’s commands?  After our inevitable failure, if our benefactor graciously allowed us to start over and try for another month, would we do it this time?  Or the next time? Or the next?

What this thought experiment shows us is that we can’t not sin.   Abstaining from sin even for the shortest period of time is exhausting.  Our attempts at reformation are usually short-lived and superficial.  Eventually, we throw up our hands and say, “This is so pointless.  It’s not worth it.   It’s not hurting anyone.  If it ever becomes a real problem, then I’ll deal with it.”

That’s the language of addiction.  We are all sin addicts.

Like the judicial metaphor, the metaphor of sin as slavery undermines the idea that we can offset our bad deeds with our good deeds.  What use is it to the alcoholic to total up all the hours he has been sober and compare them to the hours he has been drunk? Is the heroin addict any less an addict because he helps his mother do the laundry?  Moral debits and credits are irrelevant to our condition because all the credit in the world can’t cleanse our hearts. They can’t pronounce us innocent and they can’t heal us.

Seeing sin as slavery is also a useful complement to a judicial understanding of sin.  If the judge announces that the drug addict has been cleared of all charges, he is just as much a slave as he was before the verdict was passed.  We certainly need forgiveness, but we need more than just forgiveness. We also need transformation.  We need someone to rescue us out of bondage, break our chains, and lead us into freedom.

If we return to our original argument, we’ve now defended all four premises. In summary, if we recognize that Christianity is unique in its view that of sin and salvation and we come to realize that we are radical sinners in need of salvation, then we’re justified in believing that Christianity is true.

Previous: Part 3 – Are we radically sinful?