What is critical theory?

Critical theory is a set of beliefs or ideas that is foundational to many different disciplines in the humanities: Gender Studies, Cultural Studies, Critical Race Theory, Critical Pedagogy, Feminism, Anthropology, Literary Criticism. 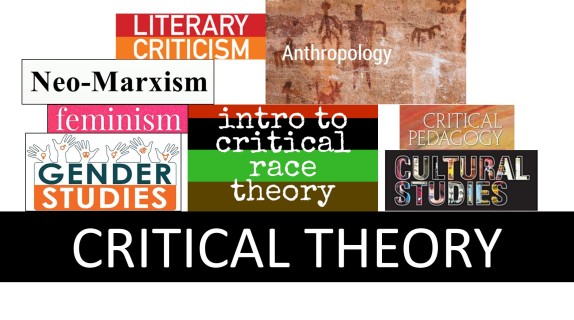 But if most people in these disciplines don’t attach a list of “The Ten Commandments of Critical Theory” to their syllabus, then how exactly do we know what it is? That’s a difficult question. Like any broad philosophical movement, it can be hard to define. I think the best approach is to identify the set of basic principles shared by most modern critical theorists. Rather than focusing on the historical origin of these ideas, we can evaluate the ideas themselves.

So what are the basic premises of critical theory? I’ve identified seven: four major premises and three minor ones. The first four are nearly universally accepted, while the final three are popular, but not quite as widespread  In this next section, I’ll explain each belief and illustrate it with a quote or two. But then, I want to provide an example of how we see these ideas at work in popular culture. I’m hoping that, after we work through a few of these, you’ll begin to realize how pervasive these ideas really are. You see them all the time, in movies, in music, on social media, and in lecture halls all over the country.

Premise #1: Individual identity is inseparable from group identity as ‘oppressed’ or ‘oppressor’

First, critical theory insists that our individual identity, who we are as individuals, is inseparable from our group identity. In particular, our individual identity depends on whether we are part of a dominant, oppressor group or a subordinate, oppressed group with respect to some particular identity marker. In other words, all categories like race, class, gender, physical ability, age, and so forth are divided into categories of oppressed and oppressor, subordinate or dominant, victim or victimizer. Your identity is inseparable from your membership in these various groups.

For example, Peggy McIntosh, who coined the phrase ‘white privilege’ in a seminal 1988 paper, writes “My schooling gave me no training in seeing myself as an oppressor.” In other words, she was an oppressor, but she didn’t know it. “I was taught [wrongly] to see myself as an individual whose moral state depended on her individual moral will.” According to critical theory, it’s not possible for you to say “Ok, I understand that there are racist white people out there who create racist laws. I’m not denying that. But that’s not me. I should be treated as an individual, not just as a member of a group.” Critical theorists deny that you can understand your identity apart from your membership in a dominant group.

How do we see this claim emerge in practice? Here’s an interesting example. A few weeks ago, I entered the phrases ‘old white male’ and ‘entitled white male’ into the search box of Twitter. Here are some of the results, all from people with thousands or hundreds of thousands of followers. (Note the number of retweets and likes). 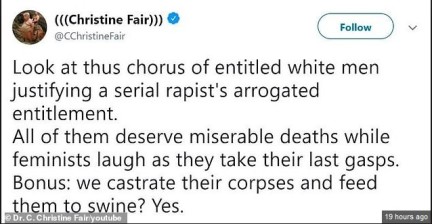 There are two interesting observations to make: first, notice how individual men, like Ted Cruz or other senators, are treated as a single, monolithic demographic group. The Tweets don’t complain that “Ted Cruz will say anything.” Instead, they complain that “Old white men like Ted Cruz will say anything.”  His individual identity is inextricably linked to his group identity.

Second, try substituting “white men” with any other demographic group. Could you imagine how much greater the outrage would be if you fantasized openly about the deaths of “old Asian women” or “poor Hispanics”?  What’s the difference? The difference arises from power dynamics. These other demographic groups are not dominant oppressor groups; therefore, it is not socially acceptable in most settings to mock or deride them as a group. On the other hand, it is not as problematic to mock or deride “old white men” because they are an oppressor group.

Hegemonic power is the ability to impose your values, expectations, and norms on the rest of society. In this way, hegemonic power is distinguished from money, or influence, or mere numbers. Listen to Sensoy and DiAngelo: “In any relationship between groups that define one another (men/women, able-bodied/disabled, young/old), the dominant group is the group that is valued more highly.  Dominant groups set the norms by which the minoritized group is judged.  Dominant groups have greater access to the resources of society and benefit from the existence of the inequality”

Given this tenet, we can see why men or whites or heterosexuals or the rich are classified as ‘oppressors.’ When critical theorists make this claim, they are not necessarily saying that all men or all whites or all heterosexuals engage in “prolonged or cruel unjust treatment or control.”  That would be the dictionary definition of ‘oppression.’  Instead, they’re arguing that these groups, as groups, have imposed their values on society. That’s why they can say that a man is an oppressor even if he has never treated a woman cruelly or unkindly in his life.

It also explains why power has nothing to do with numerical size. For instance, only 32% of the U.S. population is white and male. An even smaller fraction of this population is highly-educated (only around 12% have graduate degrees) or very wealthy (the 1% is, well, 1%).  But these groups are all regarded as dominant, oppressor groups.

“Different oppressed groups find solidarity in the experience of oppression.” David Mura -a Japanese-American activist- writes: “I, as a Japanese-American, feel a kinship to both Blacks and Native Americans that I do not feel with white Americans. It… comes from our histories as victims of injustice” Similarly, Cherrie Moraga writes: ““I realized I could be beaten on the street for being a [lesbian]. If my sister’s being beaten because she’s Black, it’s pretty much the same principle.. The connection is blatant” Here we see that people with very different identity markers are united by their shared oppression. It doesn’t matter whether you experience oppression because of your race and I experience oppression because of my sexuality. We’re both oppressed and that can draw us together.

Here’s an example of how we see this solidarity in practice.  I pulled this photo off of the NCSU website.  Notice the sign in the foreground.  BlackLivesMatter, TransLivesMatter, MuslimLivesMatter. 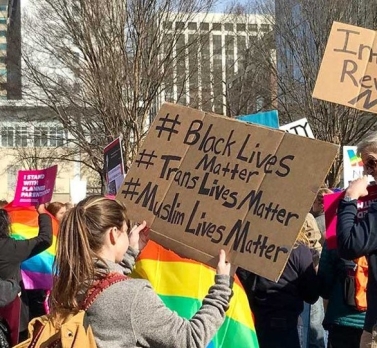 If you think about that slogan for a second, it’s actually a surprising combination. Those are three separate issues, right? Race, gender, and religion. What do they have in common? Oppression. According to critical theory, blacks, transgendered individuals, and Muslims are all oppressed groups. That’s why we see so much confluence between these activist groups and the causes they support. There may be tension between the groups in terms of self-interest; what’s good for blacks or Muslims might not be good for Hispanics. Yet these groups can still be united in their experience of oppression.

Premise #4: Our fundamental moral duty is freeing groups from oppression

This premise might be the most important one of all: “Our fundamental moral duty is freeing groups from oppression.” Here’s feminist Suzanne Pharr: “These political times call for renewed dialogue about and commitment to the politics of liberation…Liberation requires a struggle against discrimination based on race, class, gender, sexual identity, ableism and age.”  She’s writing that in 1996, by the way, in the middle of the Clinton presidency. Unsurprisingly, these sentiments were amplified just a little by Trump’s election.

What are the implications of this commitment? Notice that ‘liberating groups from oppression’ is said to be our fundamental moral duty. It is very rare for proponents of critical theory to affirm or promote moral duties like honesty, kindness, patience, chastity, marital fidelity, or self-control. Even when they talk about economics, the duty of personal charity, personal generosity, and personal giving, is rarely discussed. Instead, the discourse centers on dismantling unjust structures. This focus on liberation can have serious implications.

An extreme example of ‘liberation’ displacing all other moral concerns can be seen in groups like Antifa. Last year, a member of Antifa hit a Trump supporter on the head with a bike lock. Amazingly, the man who committed the assault taught ethics at a local university. Here, even moral imperatives like “you shouldn’t hit people with bike locks” is considered to be less important than abstract resistance to ‘oppression.’  Obviously, Antifa is an extreme example, but it shows this principle at work in practice.

Next, let’s look at three final propositions which are not quite as central to critical theory but are still important.

Here are Anderson and Collins: “The idea that objectivity is best reached only through rational thought is a specifically Western and masculine way of thinking – one that we will challenge throughout this book.” What do they propose to take the place of rational thought? Story. Narrative. Personal testimony. Lived experience.

One common example of this way of reasoning is in the debate over abortion. It’s common for men who attempt to discuss abortion to be told: “No Uterus, No opinion.”  Why? One reason is that a man, as an oppressor, cannot understand the lived experience of women, who are oppressed.

Premise #6: Oppressors groups hide their oppression under the guise of objectivity

The claim being made is that there are no completely neutral observers who present us with totally objective ‘facts.’ Instead, oppressor groups ‘claim’ that their observations are neutral, but this claim is only a strategy to cloak their will to dominate.

One might think that this premise would be limited to controversial ‘facts’ about politics or psychology, but some critical theorists are willing to take this claim to an extreme conclusion. For example, the abstract from a recent paper on feminist glaciology argues that science is “gendered” and that “feminist glaciology framework generates robust analysis of gender, power, and epistemologies in dynamic social-ecological systems, thereby leading to more just and equitable science and human-ice interactions.” I know that sounds like a hoax, but it truly seems to be legitimate. And it’s fully consistent with the view of human knowledge put forward by critical theorists.

Premise #7: Individuals at the intersection of different oppressed groups experience oppression in a unique way

Here’s a quote from the authors of an influential book on critical race theory: “Imagine a black woman [who may be] a single working mother… She experiences, potentially, not only multiple forms of oppression but ones unique to her and to others like her.”  Although the phrase ‘intersectionality’ is a bit of a trigger word for conservatives, I take it to be one of the least controversial concepts in critical theory.  If we define it carefully, it simply says that when it comes to identity, there are ‘interaction effects’ (for you sociologists) or ‘off-diagonal elements’ of the oppression matrix (for you engineers). Basically, we can’t treat members of a particular demographic as totally monolithic. That ought to be totally uncontroversial. The applications of the concept of intersectionality are controversial, but the basic concept itself should not be.

Where do we see intersectionality? Here are two photos from the Women’s March in 2017. This sign is a good example of intersectionality. On the one hand, women of all color can find solidarity in their common experience of oppression. But not so fast!  53% of white women voted for Trump. Even at an avowedly anti-Trump rally that was organized to protest his election, intersectionality shows up. Race and gender intersect so that shared gender is not necessarily enough of a basis for solidarity.

I hope I’ve convinced you that critical theory helps to explain many phenomena. If we understand it, we can understand a lot of what’s happening in academia, in our culture, and in our politics.

Previous: Part 2 – What is social justice?
Next: Part 4 – What are the strengths of critical theory?