Let’s turn now to the question: what is social justice? If you want to have an intelligent conversation or think intelligent thoughts, you need to define your terms clearly. This discussion is no exception. What does ‘social justice’ mean? The answer is complicated because there are many different ways in which people use the phrase ‘social justice.’ Let me list just three: two concrete, and one more nebulous. 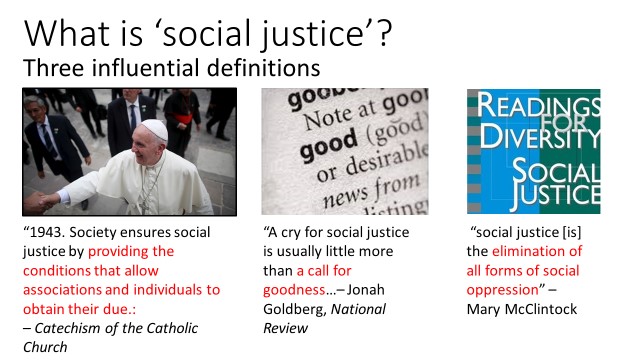 First, a concrete definition. The term ‘social justice’ was coined by a Catholic priest in the 19th century.  He used it to encapsulate the Catholic Church’s teaching about what a just, fair, righteous society looks like – a society which promotes human flourishing.  Even today, there is an entire section in the Catholic Catechism on ‘social justice.’ Additionally, when some evangelical Christians talk about ‘social justice,’ they’re also thinking about “applying biblical principles of justice to society.”  However, my guess is that when you mention the term ‘social justice’, most people don’t immediately think of ‘Catholic social teaching’ or ‘the Bible.’  Some might, but most don’t. When you hear the phrase ‘social justice’ on a college campus, maybe 5-10% of people are using it this way.

Second, there’s a more common, but imprecise definition. The phrase ‘social justice’ can be used as a catchphrase, a synonym for ‘a very good thing that everyone wants.’  So if your roommate says that he cares about ‘social justice’ and you say “what’s that?” it’s possible that he’ll respond: “Uh… you know… it’s justice… but social. Social. Justice. It’s just one of those things that everyone loves, like ice cream or puppies or baseball. And if you don’t love it, you’re a monster!”

If we’re a little more careful, we could define ‘social justice’ as “the application of justice to laws and social institutions.”  But then, you have to answer questions like: “What is justice?” “What is a just law?” “How do we apply the concept of justice to social institutions?” These are very important questions that don’t have agreed upon answers. People could accept this definition and still differ radically over what ‘social justice’ entails because they have entirely different conceptions of ‘justice.’ So this second definition is common, but not very concrete or helpful.

But there’s a third definition and that’s the definition I want to focus on tonight. Here’s a book called “Readings for Diversity and Social Justice.” 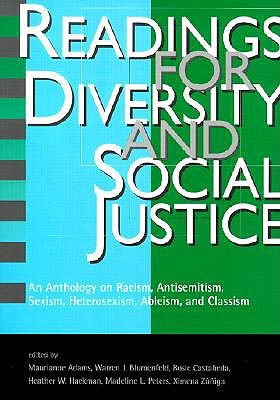 It’s an anthology of essays, articles, and book chapters on a whole variety of topics, all of which are categorized under the heading of ‘social justice.’  Unsurprisingly, the phrase ‘social justice’ popped up quite a bit, but I just assumed that they were using it according to definition #2: it was just a vague buzz-word that didn’t mean very much.  I came across the first explicit definition of the phrase “social justice” on page 483.  I kid you not.  Page 483.  The definition provided was: “social justice [is] the elimination of all forms of social oppression.” I had an epiphany. Everything suddenly made sense.

The authors in this book were not using the term ‘social justice’ as some nebulous, meaningless catchphrase. It meant something very concrete and precise. To them, ‘social justice’ meant ‘liberation from all forms of social oppression.’ They’d been using this phrase perfectly consistently and concretely throughout the book. And they had been enumerating many different forms of oppression: sexism, racism, classism, homophobia, transphobia, colorism, ageism. It’s right there on the cover of the book! The authors were unanimous that all these –isms were forms of oppression and that social justice just is the elimination of these oppressions.  That’s their definition of ‘social justice.’

So we have three potential definitions for social justice: Catholic social teaching, an imprecise positive buzzword, and ‘liberation from oppression.’  Tonight, I want to focus just on this third definition: ‘liberation from oppression.’  Why? Because that’s what I think most people actually mean when they talk about ‘social justice.’  I’m certainly not denying that it’s possible to use the phrase in some other way. But I want to focus on this one definition, because it is very influential in academia and is the one you’re the most likely to run into on campus.