What are the strengths of critical theory?

Let’s turn next to the positive aspects of critical theory which, again, is the ideology at the heart of the social justice movement.

A focus on systems

One great strength of critical theory is its focus on systems rather than on individuals. This focus provides a number of important insights.

First, the idea that ‘systemic racism’ or ‘systemic sexism’ can exist is anathema to many conservatives and to some segments of our hyper-individualistic culture. But a moment’s reflection shows that this dismissal is incorrect.

Take slavery or the Holocaust or Jim Crow or apartheid in South Africa. Clearly, these horrors can’t be reduced to individual acts of immorality. In all of these examples, immorality was codified and written into law.  The law then informed and shaped human moral intuitions, as it always does.  A Nazi concentration camp guard committed atrocities not because he necessarily had a particular hatred of Jews, but because he was simply doing his job, going with the flow, trying not to make waves, etc…. Human beings were individually morally responsible for their actions, but these laws and institutions and systems dramatically amplified the effects of human wickedness.

Second, the concept of ‘privilege’ is an important one in critical theory. It can be defined as the unearned advantages that the dominant group has over a subordinate group, all things being equal. For example, we can define white privilege as the “unearned advantages that whites have over people of color, all other things being equal.”  Defined in this way, white privilege can be measured. 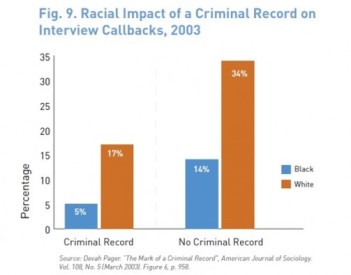 For example, a sociological study by Dr. Devah Pager examined interview callbacks. if you compare blacks and whites with no criminal record, it was found that whites were more than twice as likely to receive an interview callback as blacks. It even was found that whites with a criminal record were more likely to receive interview callbacks than blacks with no criminal record. Whites did not do anything to deserve this advantage. It’s a measurable example of white privilege. Similarly, a different audit study sent out a number of identical resumes, which differed only in the names they used. If they used a white-sounding name like ‘Emily’ or ‘Greg’ the callback rate was 10%. If they used a black sounding name like ‘Lakisha’ or ‘Jamal’, the callback rate was 6.7%. Another unearned advantage.

It’s reasonable to point out that these effects exist and are harmful. They’re unfair. If you’re black and you’re looking for a job, it’s not fair if you get turned down because of your race. Again, the idea of ‘white privilege’ can make a lot of conservatives nervous, but I think it’s important to recognize that it can be a valuable way to describe injustice.

One quick word of warning before we move on to the next point: I have been careful to define these terms precisely. People often don’t do that. There are indeed ways to define and conceptualize ‘systemic racism’ or ‘white privilege’ that I think are incorrect. But I’m only trying to show that there is nothing necessarily problematic with these terms. That said, make sure people provide definitions.

The sinfulness of oppression

Second, critical theorists insist that oppression is sinful and they’re entirely correct. Christians especially should agree with this claim because the Bible is emphatic in its condemnation of oppression in both the Old and New Testaments.  The Bible goes so far as to say that Jesus himself was a ‘man of sorrows’ who was ‘oppressed and afflicted’; God identifies with suffering people and commands his followers to seek justice on their behalf. Now, keep in mind that the Bible and the dictionary define ‘oppression’ very differently than critical theorists. Nonetheless, when those in authority are using the power to crush and abuse the powerless, Christians should absolutely be defending the rights of the vulnerable.

The noetic effects of power

Third, critical theory recognizes what could be called the ‘noetic effects of power,’ that is, how power can influence and corrupt our interpretation of the evidence. It also has the tendency to blind us to how we have been corrupted. Critical theorists are right to warn us that our motives and hidden desires will corrupt our supposedly neutral, objective, and impartial arguments.

Similarly, hegemonic power does exist and it can have an insidious effect on our norms and values.  For example, the way various groups are portrayed in movies, television, books, and advertising will subtly influence our thinking. We should be careful to interrogate our attitudes and ensure that they are not the unreflective product of popular stereotypes.

A voice for the marginalized

Finally, critical theorists often desire to give a voice to the voiceless, to speak up on behalf of victims. This idea is wholly compatible with ethical and biblical principles. We should care for the vulnerable. We should help those who cannot help themselves.

Previous: Part 3 – What is ‘critical theory’?

Next: Part 5 – What are the weaknesses of critical theory?