How should we think about the application of biblical principles of justice to society and institutions? Here are some considerations. 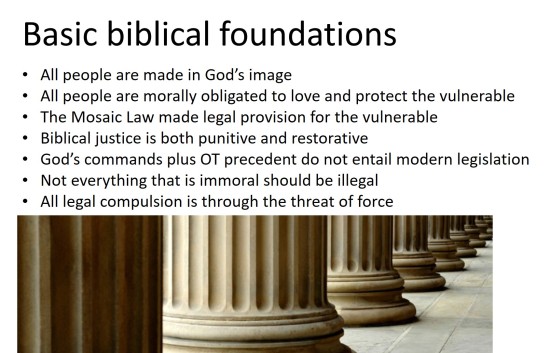 First, the doctrine of the Imago Dei is at the heart of all Christian ethics. All people, regardless of age, gender, physical ability, or any other characteristic have equal value and dignity (Gen. 1:27, Acts 17:26-28, Mark 12:30, etc…). Any law or system which undermines this basic truth is wicked.

Second, all people everywhere, not just Christians but non-Christians as well, are commanded to love their neighbor as themselves and –especially- to care for the vulnerable (Prov. 31:8-9, Luke 12:33-34, James 1:27, etc…). This idea is taught throughout the Bible in dozens of passages.

Third, people sometimes argue that concern for the poor is not the proper role of government. They will maintain that while Christians have individual responsibilities to care for the poor, it is always illegitimate for the government to create laws which instantiate concern for the poor and vulnerable. But that cannot be true. The Old Testament contains numerous laws that provide legal protection and legal provision for the poor and vulnerable: widows, orphans, the stranger, the alien (Lev. 19:10, Lev. 23:22, Deut. 14:28-29, etc…). Keep in mind that these were not just commands given to individual Israelites; they were part of the law of the nation of Israel. So we cannot argue that it is never permissible for governments to enact laws for the benefit of the poor. When God instituted the government, he enacted such laws.

It sounds like the Bible is pretty liberal, so far. Let’s all start voting Green Party, right? Not quite yet. Let’s consider a fourth principle.

Fifth, God’s commands plus Old Testament legal precedent do not entail modern legislation. This point is very important. Israel was unique in that it was a theocracy. Yes, God instituted laws to protect the poor. But he also instituted laws directing temple worship, sexual purity, and capital punishment. A common, but naïve, argument runs something like this: God commands his followers in both the OT and NT to care for the vulnerable, and this command was legislated under the Mosaic code. Therefore, Christians should work for the creation of such laws in the U.S. today. Sounds good. But can we apply this reasoning consistently? No.

God also forbids adultery in both the OT and NT. Moreover, adultery was punishable by death under the Mosaic Law. So should Christians push for adultery to be made illegal?

Or what about idolatry? Idolatry is absolutely forbidden throughout the Bible. It also was punishable by death under Mosaic Law. So should idolatry be illegal today?

This exercise shows us that we can’t simply port OT law wholesale into a 21st century American context. When we claim some kind of direct mandate for modern-day legislation, we’re necessarily cherry-picking. Am I saying that biblical moral principles have no relevance to what just laws look like? Absolutely not. I’m simply saying that the relationship between the laws of ancient Israel and the laws of a modern secular democracy is complicated.

Sixth: not everything that is immoral should be illegal. This seems like such an obvious point, but it’s amazing how often it’s missed. Murder, theft, and perjury are all both immoral and illegal.  But the Bible also forbids lust, greed, sex outside of marriage, pride, and taking God’s name in vain.  Does anyone think these all should be illegal? No. There is a connection between morality and legality. But deciding exactly where to draw the line is complicated.

Seventh: the Bible insists that the government ‘bears the sword.’ Even if we understand this statement metaphorically, it implies that the government has the right to use violence to enforce laws. But let me add one key observation, drawn from libertarian and conservative thought, which I think is quite important: state-sanctioned violence is the means by which the government compels obedience to all laws, not just the big ones.

If I decide to litter, I may get fined. If I refuse to pay the fine, I’ll get another fine. And if I refuse to pay that fine, the government may try to seize my property. If I refuse to turn over my property, the police may show up at my house. If I refuse to go with the police, they’ll eventually tackle me. And if I resist the police, they may shoot me. That’s how the government enforces laws: through force, or the threat of force. Recognizing that fact should make me hesitant to impose laws on others. I’m not saying we shouldn’t have laws. I’m just saying that we should recognize how serious laws are. We are threatening people with violence when we enact laws; let’s be up front about that.

Before you jump on me as a disgusting liberal or a disgusting conservative or a disgusting libertarian, notice that I haven’t said anything here at all about any particular policies. For all you know, I’m a monarchist. I’m just trying to set biblical parameters for this discussion. We have to decide which biblical principles should be enshrined in law. We have to balance our desire to protect the vulnerable with our hesitancy to use force. We have to weigh mercy versus justice. And we have to have wisdom in implementing laws, knowing that good intentions are not enough. Do you see that these issues are more complicated than you may have assumed?

Perhaps that’s part of the appeal of critical theory and the social justice movement. They offer simple answers. There are oppressed people and oppressors. Good guys and bad guys. Just make sure you’re on the side of the good guys, and everything will be fine. In contrast, I think the Christian answer to creating a ‘just society’ is going to be complicated. That’s why we should show a lot of charity and humility when talking to Christians who don’t share our political views.

But is that all we can say about creating a just society? “It’s complicated”? No. The Bible has a much more powerful response.

Does that sound like a cop-out to you? Let me speak candidly: if your thirst for social justice is expressed solely through hashtags, bumper stickers, and marches, but not also through personal acts of love, compassion, and service, then you should ask yourself how committed you are to the Bible’s standards of righteousness. So for all you young Christians eager to transform the world, in your passion for justice, don’t neglect the one institution that God ordained to be the vehicle for his message and his kingdom: the church.

Finally, let me close with some brief words of advice on how Christians can have better dialogue about social justice, both with non-Christians outside the church and with fellow believers with whom you disagree.

First, we need to stop yelling ‘Marxist’ or ‘fascist’ at everything. There’s no better way to make people defensive and close them off to dialogue. You don’t need to label a claim to show that it’s false.  Challenge peoples’ ideas, not peoples’ motivations.

And that brings me to number four: read broadly. If you want to learn about some subject like race, read books on it from multiple perspectives, by authors like the ones shown here. “But wait,” you say, “I thought we’re supposed to get multiple perspectives. Why are all the people in this picture black men?” Right. Because black men all have the same perspective on race? Have you been listening to this talk? Racial groups, gender groups, economic groups are not monoliths. People are individuals with their own ideas. Don’t think that if the authors you read are multi-colored, then they are ideologically diverse. That’s no guarantee. Read broadly. And read critically. In fact, reading broadly will help you read critically because it will force you to decide which claims are true and which are false.

Focus on policies, not slogans

Five, focus on policies, not on slogans. It is incredible how much enmity there is right now in society and in the church over ‘social justice.’ “Are you for social justice?” “Are you against social justice?”  Instead of demanding that your political opponents support some nebulous phrase, why not ask them specific questions: “do you think we should increase the minimum wage? What are the pros and cons?” or “what are your top three suggestions for criminal justice reform?” You’re almost guaranteed to have a better discussion.

Lastly, we need to uphold the primacy of the gospel. Here are the two most important questions when it comes to ‘social justice.’

First, is ‘social justice’ an imperative? Does God command it? Is it our moral obligation? Is it something we ought to do? “Yes, of course!” many people will say “Christians are commanded to do ‘social justice’.” That’s one possible answer.

Second, is the gospel an imperative? Is it a command from God? Is it something you have to do? Is it a moral obligation you have to fulfill?  No.  And that’s the only possible answer.

The gospel is an indicative statement. It is ‘good news’ about what God has done on our behalf, through Christ. It’s the good news of his perfect life, his substitutionary atonement, his resurrection, and his ascension. It is the good news that he died on the cross for our sins and rose to life for our justification. It is news, not advice. It is ‘done’ not ‘do.’  If social justice is an imperative, an obligation, something that we ‘ought’ to do, then it is very good and important. But it is the Law, not the Gospel.

This idea was crucial to the Reformation and it’s sill crucial today. If you think that ‘social justice’ –however you define it- is a Christian imperative, that it’s something Christians absolutely must do, just make sure you don’t insert it into the gospel. Yes, we should live justly, and love mercy. Yes, we should love our neighbor as ourselves. Yes, we should care for the vulnerable. But we have failed to do that.  We are condemned as law-breakers and deserve God’s wrath. The gospel is the good news that, in spite of our failure, Jesus came to save us. When we trust in him, then God gives us the power and the desire to follow his commands. But don’t mingle the glorious “it is finished” declarations of the Gospel with the “do this and live” imperatives of the Law. The Law condemns. The Gospel saves. Trust in the gospel, and you’ll become a person who seeks justice, loves mercy, and walks humbly with his God.