Should Christians support social justice?  For some Christians, the answer is ‘unequivocally yes.’  The Bible is filled with commands to care for the poor, defend the powerless, seek justice for the widow and orphan, and free the oppressed. 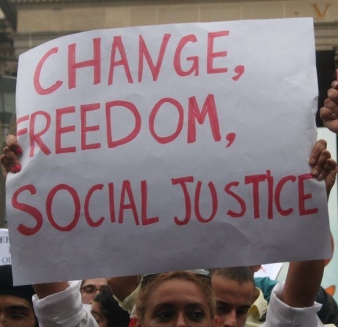 To reject social justice is -in their minds- to reject the commands of the Bible.  Conversely, other Christians dismiss ‘social justice’ as a meaningless buzzword invented to drum up support for progressive policies.  Which group is correct?

In this essay, I’ll argue that social justice is not an empty catchphrase.  It has a specific, consistent meaning in large segments of academia and in substantial portions of our culture.  It also shares some of the same concerns as a biblical conception of justice: care for the poor, the marginalized, and the powerless.  However, it is often grounded in a worldview that is largely antithetical to Christianity.  Therefore, Christians should be extremely hesitant to use the term ‘social justice.’  I’ll support this claim in what follows, relying on two important anthologies: Anderson’s Race, Class, and Gender and Adams’ Readings in Social Justice and Diversity.

Before we can think through the nature of social justice, we need to make a quick detour into an ideology known as ‘critical theory.’  Critical theory is based on an analysis of power dynamics between groups. It maintains that our identities as individuals are fundamentally tied to our categorization in terms of identity markers like gender, race, ethnicity, class, and sexual orientation.  The fundamental duty of human beings is to seek the liberation of oppressed groups from the domination of oppressor groups.  Since the 1960s, critical theory has come to dominate academic disciplines such as anthropology and Gender Studies and is increasingly influential in the broader culture as well.

While critical theory can provide an insightful analysis of the ways in which power can corrupt relationships and institutions, it often functions as a worldview – an overarching narrative by which we interpret all of reality.  As a worldview, critical theory is both self-contradictory and inescapably incompatible with Christianity, for several reasons (see this book review for a more detailed analysis)

But what is the connection between critical theory and social justice?  Read on.

Let me offer several pieces of evidence to support my conclusion.

First, the use of ‘social justice’ to mean “liberation from oppression, as understood by critical theory” can be seen in the close connection that numerous authors draw between social justice and the oppression of various groups.  Adams et al write that “ableism, antisemitism, heterosexism, and racism” are all “social justice issues” (p. xiii). Suzanne Pharr writes that “Liberation requires a struggle against discrimination based on race, class, gender, sexual identity, ableism and age – those barriers that keep [people] from economic and social justice.” (p. 450).  Barbara Love observes that “patterns of thought and behaviors that support racism, sexism, and classism and other manifestations of oppression … are learned” and characterizes a “liberation worker” as one who is committed to “greater equity and social justice” (p. 470).  Examples could be multiplied.

Second, the connection between ‘social justice’ and ‘critical theory’ is seen in the fact that ‘liberation from oppression’ refers only to groups and never to individuals.  For example, in none of the ~150 essays I’ve read did the authors discuss the possibility that a female employer might ‘oppress’ her male employee or that a black professor might ‘oppress’ his white student.  Why not? Because the ‘liberation from oppression’ which the authors envision does not take place primarily at the level of the individual but at the level of groups, which is a hallmark of critical theory’s emphasis on groups over individuals.

Third, the fact that ‘social justice’ is grounded in critical theory is shown by the omission of any discussion of traditional components of justice, such as the notion of ‘impartiality of judgment’. Liberation from oppression does not entail impartiality; if anything, it entails that we ought to show partiality towards the oppressed.  I am not arguing here that the oppressed should not be the special objects of our concern.  I am merely showing that if ‘social justice’ followed a traditional understanding of ‘justice’ the authors should be expected to make some mention of impartiality.  The fact that they do not suggests that ‘social justice’ is not merely an updated version of traditional understandings of justice.

Similarly, ‘justice’ traditionally includes a punitive element. We speak of ‘justice being served’ when a murderer is punished or when a rapist is sentenced to prison.  Yet, once again, in the 150 essays in Adams’ and Andersons’ anthologies, no mention was made of the punitive element of justice. This omission is natural if ‘social justice’ refers to ‘liberation from oppression’, but it is hard to explain if ‘social justice’ tracks with traditional notions of justice.

Based on these considerations, we should conclude that ‘social justice,’ at least as it is being used in these two highly influential texts, does not refer to a traditional understanding of justice at a societal level but is better understood as liberation from oppression from the perspective of critical theory.

What, then, should the Christian think of ‘social justice’, defined in this sense?

Even apart from its connection to critical theory, Christians should recognize that ‘social justice’ is reductive.  Proponents of social justice tend to see it as the ultimate moral goal of humanity. But from a biblical perspective, neither morality nor justice can be reduced to liberation from oppression.  Many sinful actions do not involve oppression. Cursing God, worshiping idols, dishonoring one’s parents, and having sex outside of marriage are immoral but do not involve oppression.  Similarly, biblical justice involves not just liberation from oppression but also impartiality in judgment (Lev. 19:15, Ex. 23:3) and the punishment of wrongdoing (Rom. 13:4, 1 Pet. 2:14).

Finally, critical theorists define ‘oppression’ to include categories with which most Christians would be uncomfortable.  Are heterosexual privilege and cisgendered privilege forms of oppression that need to be eliminated?  Do churches that allow only men to become elders perpetuate institutional sexism, which must be destroyed? Were “most of us… oppressed as children through the impact of adultism” (Thompson, p. 479)?  If Christians are wholly committed to social justice as defined by critical theorists, then on what grounds would they object to these claims?

Despite the arguments above, I suspect that many Christians will still not see a problem unequivocally supporting ‘social justice.’  All that is needed, they could argue, is for the term to be redefined in a way that is compatible with the Bible.  While I agree in theory, in practice this approach is unworkable.

The same is true of any number of established words and phrases: “Make America Great Again”, “pro-choice”, “pacifism.”  It seems dishonest for a Christian to use words or phrases which are likely to convey one meaning to the listener while secretly shoehorning them into an entirely different definition.

Alternatively, a Christian could argue that ‘social  justice’ does not have a well-established meaning and can therefore be used legitimately.  First, if the phrase is merely an ambiguous buzzword, one wonders why using it is helpful!  But second, based on my reading, I no longer think this view is correct.  When I think of major advocates of ‘social justice’ and organizations that claim the mantle of ‘social justice,’ they seem to be using the term in precisely the same way as the authors in these books.

In conclusion, I want to emphasize that the Bible absolutely commands Christians to care for the poor, to heal the sick, to comfort the afflicted, and to liberate the oppressed.  Not only do we follow a Savior who lived out those values, we follow a Savior who was himself poor, sick, afflicted, and oppressed (Is. 53) and who takes our service to vulnerable believers as service to himself (Matt. 25:31-46).  However, the Bible thinks about justice very differently than critical theorists.

Therefore, to announce that we unequivocally support ‘social justice’ as a biblical mandate is confusing at best and misleading at worst.  Christians, especially young Christians, who have never thought carefully and critically about what ‘social justice’ means may assume that any organization which advertises itself as a proponent of social justice is worthy of our support.  Even more troubling, many Christians are attracted to social justice because of an appropriate concern for the poor and oppressed, but then experience worldview drift, as their presuppositions become more and more governed by critical theory and less and less by the Bible.

Instead of redefining social justice, a simpler option is to state that Christians support justice in its full biblical sense, which has punitive, restorative, personal, and communal components.  If asked to explain, we can elaborate.  It may take longer, but it will lead to deeper conversations and better communication.