James H. Cone is known as the father of Black Liberation Theology, a school of theology which seeks to interpret Christianity through the lens of the black freedom struggle. 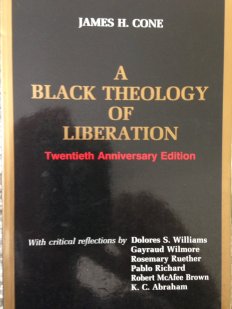 In what follows, I’ll provide quotes from one of Cone’s most famous works, A Black Theology of Liberation. I won’t offer any commentary, except to say that the statements I’ve selected are characteristic of the work as a whole. Indeed, most of these quotes reflect ideas that are repeated multiple times throughout the book.

“there can be no theology of the gospel which does not arise from an oppressed community” (p. 5).

“the God of the oppressed takes sides with the black community. God is not color-blind in the black-white struggle, but has made an unqualified identification with blacks.” (p. 6)

“In passing, it may be worthwhile to point out that whites are in no position to question the legitimacy of black theology. Questions like ‘Do you think theology is black?’ or ‘What about others who suffer?’ are the product of minds incapable of black thinking” (p. 8)

“The revolutionary context forces black theology to shun all abstract principles dealing with what is the ‘right’ and ‘wrong’ course of action. There is only one principle which guides the thinking and action of black theology: an unqualified commitment to the black community” (p. 10)

“the development of black power means that the black community will define its own place, its own way of behaving in the world, regardless of the consequences to white society. We have reached our limit of tolerance, and if it means death with dignity or life with humiliation, we will choose the former. And if that is the choice, we will take some honkies with us.” (p. 15)

“The black experience is catching the spirit of blackness and loving it. It is hearing black preachers speak of God’s love in spite of the filthy ghetto, and black congregations responding Amen, which means that they realize that ghetto existence is not the result of divine decree but of white inhumanity. The black experience is the feeling one has when attacking the enemy of black humanity by throwing a Molotov cocktail into a white-owned building and watching it go up in flames. We know, of course, that getting rid of evil takes something more than burning down buildings, but one must start somewhere.” (p. 25)

“If God is not for us, if God is not against white racists, then God is a murderer, and we had better kill God. The task of black theology is to kill gods that do not belong to the black community” (p. 27)

“From this [biblical witness], however, we should not conclude that the Bible is an infallible witness. God was not the author of the Bible, nor were its writers mere secretaries. Efforts to prove verbal inspiration of the scriptures result from the failure to see the real meaning of the biblical message: human liberation! Unfortunately, emphasis on verbal infallibility leads to unimportant concerns. While churches are debating whether a whale swallowed Jonah, the state is enacting inhuman laws against the oppressed. It matters little to the oppressed who authored scripture; what is important is whether it can serve as a weapon against oppressors.” (p. 31)

“God’s revelation has nothing to do with white suburban ministers admonishing their congregation to be nice to black persons. It has nothing to do with voting for open occupancy or holding a memorial service for Martin Luther King, Jr. God’s revelation means a radical encounter with the structures of power which King fought against to his death. It is what happens in a black ghetto when the ghettoized decide to strike against their enemies. In a word, God’s revelation means liberation — nothing more, nothing less.” (p. 46)

“In what sense are the oppressed sinners?

In an attempt to speak to this question, I must point out quite clearly that oppressors are in no position to speak about this sinfulness of the oppressed. Black theology rejects categorically white comments about the sins of blacks, suggesting that we are partly responsible for out plight. Not only does such talk provide an ungodly method for easing the guilt of white oppressors, but it also suggests that whites and blacks are one community. Sin is a concept which is meaningful only within the context of a Christian community. It is community recognition that some have lost their identity for being. Inasmuch as whites and blacks do not share a common identity, whites cannot possibly know what sin is from a black perspective.

Black theology does not deny that all persons are sinners. What it denies is white reflections on the sin of blacks. Only blacks can speak about sin in a black perspective and apply it to black and white persons. The white vision of reality is too distorted and renders whites incapable of talking to the oppressed about their shortcomings.

According to black theology, the sin of the oppressed is not that they are responsible for their own enslavement – far from it. Their sin is that of trying to ‘understand’ enslavers, to ‘love’ them on their own terms. As the oppressed now recognize their situation in the light of God’s revelation, they know that they should have killed their oppressors instead of trying to ‘love’ them.” (p. 51)

“The black prophet is a rebel with a cause, the cause of over twenty-five million black Americans and all oppressed persons everywhere. It is God’s cause because God has chosen the blacks as God’s own people. And God has chosen them not for redemptive suffering but for freedom. Blacks are not elected to be Yahweh’s suffering people. Rather we are elected because we are oppressed against our will and God’s, and God has decided to make our liberation God’s own undertaking.” (p. 56)

“If there is one brutal fact that the centuries of white oppression have taught blacks, it is that whites are incapable of making any valid judgments about human existence. The goal of black theology is the destruction of everything white, so that blacks can be liberated from alien gods.” (p. 61-62)

“[White revolutionary theologians] should know by now that, in view of white brutality against blacks and church participation in it, no white person who is halfway sensitive to black self-determination should have the audacity to speak for blacks. That is the problem! Too many whites think they know how we feel about them. If whites were really serious about their radicalism in regard to the black revolution and its theological implications in America, they would keep silent and take instructions from blacks. Only blacks can speak about God in relationship to their liberation. And those who wish to join us in this divine work must be willing to lose their white identity — indeed, destroy it.” (p. 62-63)

“Because blacks have come to know themselves as black, and because that blackness is the cause of their own love of themselves and hatred of whiteness, the blackness of God is key to knowledge of God. The blackness of God, and everything implied by it in a racist society, is the heart of the black theology doctrine of God. There is no place in black theology for a colorless God in a society where human beings suffer precisely because of their color. The black theologian must reject any conception of God which stifles black self-determination by picturing God as a God of all peoples. Either God is identified with the oppressed to the point that their experience becomes God’s experience, or God is a God of racism… Because God has made the goal of blacks God’s own goal, black theology believes that it is not only appropriate but necessary to begin the doctrine of God with an insistence on God’s blackness.” (p. 63)

“We have had too much of white love, the love that tells blacks to turn the other cheek and go the second mile. What we need is the divine love as expressed in black power, which is the power of blacks to destroy their oppressors, here and now, by any means at their disposal. Unless God is participating in this holy activity, we must reject God’s love.” (p. 70)

“Being free in America means accepting blackness as the only possible way of existing in the world. It means defining one’s identity by the marks of oppression. It means rejecting white proposals for peace and reconciliation, saying ‘All we know is, we must have justice, not next week but this minute.'” (p. 102)

“there can be no knowledge of the sinful condition except in the movement of an oppressed community claiming its freedom. This means that whites, despite their self-proclaimed religiousness, are rendered incapable of making valid judgments on the character of sin.” (p. 106)

“What does sin mean for blacks? Again, we must be reminded that sin is a community concept, and this means that only blacks can talk about their sin. Oppressors are not only rendered incapable of knowing their own condition, they cannot speak about it or for the oppressed. This means that whites are not permitted to speak about what blacks have done to contribute to their conditions. They cannot call blacks Uncle Toms; only members of the black community can do that. For whites, to do so is not merely insensitivity, it is blasphemy.” (p. 108)

“If Jesus Christ is to have any meaning for us, he must leave the security of the suburbs by joining blacks in their condition. What need have we for a white Jesus when we are not white but black? If Jesus Christ is white and not black, he is an oppressor, and we must kill him. The appearance of black theology means that the black community is now ready to do something about the white Jesus, so that he cannot get in the way of our revolution.” (p. 111)

“Unfortunately, the post-Civil War black church fell into the white trick of interpreting salvation in terms siliar to those of white oppressors. Salvation because white: an objective act of Christ in which God ‘washes’ away our sins in order to prepare us for a new life in heaven. The resurgence of the black church in civil rights and the creation of a black theology represent an attempt of the black community to see salvation in the light of its own earthly liberation.” (p. 127)

“To participate in God’s salvation is to cooperate with the black Christ as he liberates his people from bondage. Salvation, then, primarily has to do with earthly reality and the unjustice inflicted on those who are helpless and poor. To see the salvation of God si to see this people rise up against is oppressors, demanding that justice become a reality now, not tomorrow.” (p. 128)

“If the white and black churches do not represent Christ’s redemptive work in the world, where then is Christ’s church to be found? As always, his church is where wounds are being healed and chains are being struck off. It does not matter in the least whether the community of liberators designate their work as Christ’s own work. What is important is that the oppressed are being liberated.” (p. 134-135)