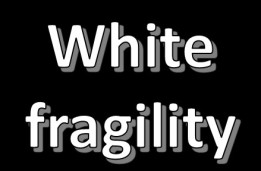 Dictionary definition: N/A
Antiracist definition: a posture of defensiveness, anxiety, and anger exhibited by whites in response to discussions of race

The term ‘white fragility‘ was coined by critical racial and social justice educator Robin DiAngelo. She defines it as “a state in which even a minimum amount of racial stress … becomes intolerable, triggering a range of defensive moves” (DiAngelo, White Fragility,  p.103).

“I’ve heard white people confess it through sobs dozens of times: ‘I’m sorry… I just don’t know how to say it… I don’t know what’s come over me…’ Some people have called this ‘white fragility,’ and they are right; faced with the same hard facts that people of color have never been able to avoid, white people don’t have the resources for resilience that have kept black people alive in America.” – Jonathan Hartgrove-Wilson, Reconstructing the Gospel, p. 158

“Ask yourself the following:..
7. Do I expect an apology when I feel like I’ve been unfairly accused of racism? …
14. Do I feel the need to prove that I’m not racist?
15. Do I feel that my opinions and perspectives about race should be given equal weight to that of a person of color, that I have something unique and important to contribute to the race conversation, and/or that it is unfair to be told to listen more than I speak?
16. Do I feel the need to defend myself on any of the above points in the comment section?
If you answered yes to any of these questions, you are dealing with white fragility. Take time to reflect on why you feel the way that you do. Take time to listen to different perspectives.” – Ally Henny, Twitter thread, 10/5/2018

First, sociologists like Eduardo Bonilla-Silva have documented how questions about race can make many whites uncomfortable, leading them to give answers that are contradictory, emotional, and even verbally incoherent. Undoubtedly, many whites are also defensive and over-sensitive in conversations about race, so that DiAngelo’s term characterizes a meaningful concept.

Second, it is certainly true that this kind of defensiveness, where it exists, will be a barrier to genuine, honest conversation. Here, the Bible’s repeated admonitions to be attentive to wisdom, feedback, and criticism are relevant. All of us need to reflect on whether we’re letting our own ego get in the way of important dialogue that has the potential to sharpen us and to make us wiser and kinder. When the subject is one as important to the unity of the American church as race, we should be all the more careful not to shut down discussion by taking offense, hardening our hearts, or taking every statement as a personal attack.

Like most concepts related to antiracism, the term ‘white fragility’ evokes an unhealthy asymmetry. One of the reasons that white people can exhibit fragility is that all people can exhibit fragility. All of us are sensitive to perceived attacks and can react defensively to challenges to our point of view. Therefore, all of us -not just whites- should consciously work to retain a posture of openness, humility, and charity in dialogue.

Second, the concept of ‘white fragility’ often involves a Kafka trap: a situation in which your denial of an accusation is taken as evidence of your guilt. In her book, DiAngelo lists the following symptoms of ‘white fragility’: feeling “singled out,” “attacked,” “silenced,” or “judged,” or making statements like “I already know all this”, “You are generalizing” or “I disagree.” (DiAngelo, White Fragility, p. 117). This kind of double-bind is plainly visible in Henny’s Self-Test quoted above, and led author James Lindsay of the Sokal^2 hoax to offer a  parody: “If you insist that the only people we should call Nazis are actual Nazis, that’s because you’re a Nazi. I call this theory Nazi Fragility, and it’s true because if you think it’s not, that’s because you’re showing it, because you’re a Nazi.”

If we’re concerned with ‘white fragility’ because it might shut down important conversations, we should probably be just as concerned that accusations of ‘white fragility’ will shut down the same conversations. The solution is not found in trading counter-accusations, but in both parties committing equally to principles of active listening, grace, and self-reflection.

Back to Antiracism Glossary