Dr. George Yancey’s “Beyond Racial Gridlock” is one of the best, most timely, and most relevant books I’ve read in years. 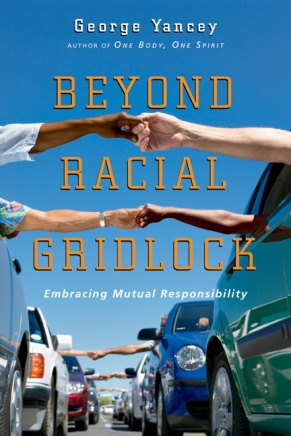 I’ll begin my review by summarizing its arguments, but I encourage everyone who is interested in racial dialogue and reconciliation to read this book.

– Chapter 1 begins with a discussion of two views of racism: individual and structural. The individual definition of racism “holds that racial strife is the result of individuals choosing to act in a racist manner” (p. 20). The shortcoming of this view is that it doesn’t acknowledge or address the effects of racism on the systems and institutions which shape our nation. The structuralist definition of racism argues that “society can perpetuate racism even when individuals in the society do not intend to be racist” (p. 21), even though it recognizes acts of personal and overt racism. These two different definitions lead to tension, because individualists “do not understand why fixing racist structures in society is so important” and structuralists “believe that [individualists] are insensitive to the real issues of racial inequality” (p. 23). Yancey favors a structuralist definition of racism which recognizes the importance of systems without ignoring the personal component of racism.

– In Chapter 2, Yancey summarizes four secular models of racial reconciliation: colorblindness, Anglo-conformity, multiculturalism, and white responsibility. The first two tend to be favored by conservatives; the last two, by liberals. Yancey believes that each of these models is flawed because it is not based on a Christian understanding of human depravity, which is key to his own proposal for racial reconciliation. In the next four chapters he describes the strengths and weaknesses of these models.

– “Colorblindness” asserts that ignoring race is the key to ending racism. On the one hand, colorblindness “sets up a laudable goal” (p. 32), was instrumental in dismantling discriminatory laws (p. 32-33), and reflects a key Christian truth that “our race, sex or nationality has nothing to do with our position before God (p. 39). On the other hand, it is naive, failing to recognize that racism and racial disparities do exist (p. 34). It tends to ignore the real pain felt by minorities (p. 35). And it is sometimes used to excuse inaction (p. 35-36).

– “Anglo-conformity” maintains that racial disparities can best be erased by “[teaching] people of color how to succeed” (p. 41). Before we dismiss it as hopelessly paternalistic, Yancey notes that this model also has several strengths: it recognizes the importance of economic disparity and tries to reduce it and it empower minorities “to be the source of the solution to their own economic distress” rather perpetual dependents (p. 46). On the negative side, it focuses entirely on economic factors, it tends to ignore structural issues that can hamstring minority success regardless of hard work, it overvalues Western ideals like individualism, and it ignores the role of intergenerational wealth transfer (p. 47-48). From a Christian perspective, Anglo-conformity rightly affirms biblical values like hard-work, but can wrongly equate Western culture with biblical imperatives.

– “Multiculturalism” states that racial reconciliation can be achieved by affirming the value of minority cultures, giving them “prominence in order to offset centuries of dominance by European culture” (p. 54). On the plus side, multiculturalism promotes important critical reflection on the shortcomings of Western culture and affirms the positives of non-Western cultures. On the minus side, multiculturalism can “tend to overlook minority shortcomings” (p. 57) and assumes a moral relativism that is inimical to Christianity (p. 62).

– “White responsibility” emerges from critical race theory (p. 65). It argues that we should “destroy institutions that exploit racial minorities for the benefit of the majority” and holds that “Racial minorities have little role in solving the problem except to bring racial issues to the attention of whites” (p. 67). The strengths of this model include its recognition of ways in which “the majority dominates society” (p. 67) and its refusal to “ignore our racial problems” or “institutional and historic racism” (p. 68). Its weaknesses are its tendency to alienate whites, who feel that they are being attacked, the that it “ignores the fact that all people, including racial minorities, are sinners… because of the [sinfulness] in all people… it is likely that racial minorities will abuse the noble status given to them by adherents of this model” (p. 70). The Christian version of this model has roots in “black theology and liberation theology” which few conservative Protestants will accept. Moreover, I agree with Yancey that this Christianized version of the white responsibility model “does not display any substantial difference from the secular version” (p. 73).

– As an alternative to these four secular models, in Chapter 6 Yancey proposes the ‘mutual responsibility model’ which is grounded in the doctrine of human depravity: all of us are sinners. Although the temptations of whites and non-whites will differ, none of us is immune to racial sin. Whites’ selfishness will tempt them to downplay historical atrocities, to minimize the existence of racism today, and to ignore their responsibility to rectify racial disparities. On the other hand, non-whites’ sinfulness will tempt them to overstate their grievances to manipulate whites.

– The dynamics of racial gridlock are presented on p. 128: “whites ignore racial issues –> minority fear –> minorities play race card [using accusations of racism to manipulate whites] –> white fear –> whites ignore racial issues….” Yancey describes the cycle this way: Whites ignore race issues by adopting a colorblind ideology which leads minorities to fear that “racism will not be taken seriously.” Minority fear causes them to “support leaders who foolishly play the race care but who at least uphold the importance of racial justice.” Minorities playing the race card makes whites fear that “they will be labeled racist regardless of what they say or do” leading them to “redouble their efforts for the colorblind philosophy.” “The vicious circle of dysfunctional race relations continues, with the fears of whites and the fears of people of color feeding on each other.”

– The solution to this cycle is for both sides to recognize that they are sinners: “As imperfect sinners, all we can do is seek to help each other and help ourselves overcome the poison of sin in the form of racism… We should do our best to hold others accountable for their sins (Matthew 18:15-18) but never with a haughty attitude (Galatians 6:1)” (p. 133). For whites, this means becoming “less judgmental of the complaints of people of color and [looking] for the validity of their complaints.” For people of color, this means being “more restrained in how they express their concerns, because they [know] that their own sin nature seduces them to exaggerate their concerns so they can gain power” (p. 134).

– The solution also involves the corporate repentance of whites, which Yancey describes as involving “sorrow for the historic and contemporary mistreatment of people of color. Its goal is that European Americans will be grieved to realize that they benefit from racism even though they are not racist themselves, and [that] they will seek to understand more of the plight of people of color because they want to end the pain of racism” (p. 95). The flip side of corporate repentance is ‘corporate forgiveness’ which does not mean that minorities “keep silent about racial injustice” but does mean that they “abdicate [their] right to bash [whites] over the head with their own repentance. Instead, [they] now have a responsibility to work with [whites] and listen to their concerns.” (p. 108-109).

– Christians have a huge role to play in racial reconciliation. Not only do we enter the discussion with a deep understanding of human depravity and our own sin, but we also recognize that God did not hold our sin against us and saved us by grace alone. Jesus is, in the words of Dr. Yancey, “the Ultimate Reconciler” who reconciles us to himself so that we can be reconciled to each other.

Next: Beyond Racial Gridlock – Part 2