Dr. Beverly Tatum is a psychologist and college administrator who specializes in race.  Her book Why Are All the Black Kids Sitting Together in the Cafeteria? 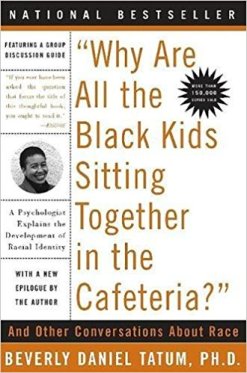 is an exploration of racial identity formation, one of Tatum’s areas of expertise.  She draws on her experience as an educator teaching classes on racism and on psychological research to explain many modern phenomena related to race and racism.

– Tatum begins her book by explicitly defining terms like ‘racism’ and ‘sexism.’ In both cases, she follows critical theory in defining them as ‘prejudice plus power’ such that “People of color are not racist because they do not systematically benefit from racism… Using the same logic, I reserve the word sexist for men” (p. 10). To her great credit, not only does she define these terms clearly, she acknowledges that their definition is controversial and urges readers to not let it distract them from the content of her book (p. 11).

– The entire work is heavily footnoted.  Given my recent reading (see here, here, and here), I have come to realize that this basic level of scholarship should not be taken for granted and it is certainly appreciated. Her chapter on affirmative action also supports her claims about the extent and effect of racism with a few experimental studies.  For example, when asked to rate college applicants, there was no significant difference between how reviewers rated White and Black applicants who were weakly or moderately qualified, but in strongly qualified candidates, “the Black applicants were evaluated significantly less positively than White applicants” (p. 119-120) (although see here for evidence of the opposite effect).

– Despite a handful of experimental studies, the bulk of the material presented came in the form of anecdotes or qualitative, non-experimental studies.  While these cannot take the place of quantitative experiments, they do give the reader valuable insight into how blacks and whites encounter and conceptualize race.  Repeatedly hearing the experiences of people of color dealing with racism (“I was then labeled certain things, whether it was ‘the oreo’ or I wasn’t really black” (p. 63), “[The isolation] never really bothered me until about senior year when I was the only one in the class”, “[my white roommates] put padlocks on their doors and their dressers” (p. 78)) helps the reader empathize with their feelings and better understand their perspectives.

– Tatum’s case for the importance and benefit of explicitly monoracial groups, a concept of which I was skeptical, was well-made.  In particular, she focused on a mandatory program at a Massachusetts middle school that brought together Black students who were being bused in to a predominantly white high school. They met daily to talk about “homework difficulties, social issues, and encounters with racism” (p. 71).  The meetings led to a dramatic improvement in school performance and “peer culture” because “young Black students were allowed to talk about the issues that hindered their performance -racial encounters, feelings of isolation, test anxiety, homework dilemmas- in the psychological safety of their own group” (p. 72).

Cons:
– Despite her clarity in defining ‘racism,’ her understanding of this concept leads to problems, particularly in her repeated insistence that the U.S. is “a racist society.”  According to Tatum, “racism, like other forms of oppression, is not only a personal ideology based on racial prejudice, but a system involving cultural messages and institutional policies and practices as well as the beliefs and actions of individuals” (p. 7). This definition of ‘racism’ makes it challenging to offer solutions to being a “racist society” or even to identify whether a particular policy is racist.

– The bulk of Tatum’s work is devoted to the theory of racial identity development, a model by which we engage with and internalize our conception of ourselves through the lens of race. But here, it’s utterly crucial to differentiate between the models that physicists use and the models that psychologists use. When a physicist talks about a model, they are talking about an interpretation of reality, one that almost always suggests empirical tests and experiments that could falsify that model.  In contrast, when psychologists talk about a model, they seem to mean “a very useful framework for understanding [some phenomenon]” (p. 54).  At least, this is how Tatum is using the term.

– Given this understanding, it was not surprising that Tatum offers no experimental support for particular models of racial identity development.  We have no way of knowing whether the stages of ‘racial identity formation’ actually proceed as Tatum suggests or whether it even occurs in all people.  More importantly, once we assume a model, it will color our interpretation of the data, so that it can be difficult to distinguish data from interpretation, which leads to my biggest difficulty with Tatum’s work.

– As I read this book, I had a hard time reconciling ‘racial identity formation’ with my own experience.  I grew up in a racially-mixed suburb. I played a lot of basketball in my teenage years, mostly with black friends.  My closest friends from high school were two white kids, three Jews, a Turk, and a Pakistani. In college, my closest friends were mostly white, but I also hung out occasionally with a group of black women whose company I really enjoyed.  I never thought that race was a very big deal.

– If I were white, these protests of ‘color-blindness’ would no doubt be attributed to White privilege.  According to Tatum’s model, I have been stranded at the most basic, immature level of racial development, having not yet accepted and internalized my racial identity.  Only by recognizing the smog of white supremacy that I’ve been breathing since childhood will I ever advance in my understanding.  The only difficulty with these assertions is that I’m not white; I’m half-Indian. My father is an immigrant and, from what people tell me, I am fairly recognizable as non-white.

– So what exactly am I to make of Tatum’s model?  And what should I think about my Black, Asian, and Hispanic friends to whom Tatum’s narrative is equally foreign?  Should we really accept the fact that we are, unbeknownst to us, experiencing “internalized oppression”? Is our insistence that race is not a major component of our identity really just a defense mechanism used to conceal deep racial wounds?  If these models are not based on systematic evidence, but are merely ‘helpful ways of thinking’, what reason do we have to accept them?

– And that raises a very important question: are these models really helpful after all?  It seems that there’s an inescapable normative component that gets smuggled into the idea of ‘racial identity formation.’  The stories and interviews in Tatum’s book surely helped me to appreciate the fact that blacks do often experience horrific racism, which can drive them to anger, self-loathing, depression, isolation, and bitterness.   But what they ought to do or what they ought to think about these experiences seems like a different question entirely.

– To put it another way, feminist scholars will make an analogous observation about women: they too breath a culture of objectification, inferiority, and male dominance from childhood.  Many of them experience abhorrent sexism and even violence.  But the path they ought to take from that point onward is quite uncertain.  Do they become radical feminists who denounce marriage and motherhood as oppression? Do they internalize media images and embrace their role as a mindless sex objects? Do they acknowledge their experience of sexism while continuing to embrace traditional gender roles as ultimately good and fulfilling?  It is here that worldviews come into play.  Observing how people do construct their identities in practice is, I think, a legitimate question for psychology to answer.  But stipulating how all people ought to construct their identities in principle is a question for philosophy or religion.

Tatum’s book is very influential and certainly worth reading for that reason alone. The interviews she records with whites, blacks, and other people of color are illuminating, provided they are understood as anecdotes rather than as a systematic sampling.  Nonetheless, her failure to provide objective evidence to support her model is a serious problem, although one that seems to be shared by many psychologists.