Edward Gilbreath’s Reconciliation Blues is an attempt to voice and explain the fatigue and frustration often experienced by blacks as they integrate majority-white evangelical churches. 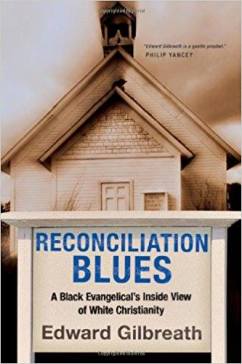 Gilbreath draws on his own work as a writer for Christianity Today and on a survey of fellow black evangelicals to explain “why we’re so blue” (p. 17).

Pros:
– The biggest selling point of this book is Gilbreath’s uniformly irenic, humble tone, which defuses the defensiveness that often accompanies discussions of race.

– His stories focus not only on the negatives but the positives of race relations within the church. From Gilbreath’s own experience hearing the gospel as a child from a ‘thick, redneckish white man’ (p. 27), to modern movements such as Promise Keepers, he recognizes that Christians have been active in racial reconciliation.

– The trust built between Gilbreath and the reader makes the negative stories he recounts more powerful: the frustration he faced as a journalist trying to address issues that might alienate CT’s predominantly white readership, a black Christian college student hearing his white classmates cheering the death of Martin Luther King (p. 101), a black ministry leader hearing the tearful confession of his white colleague over racial slurs (p. 95). Speaking of his own inner turmoil in his moments of discouragement, he writes: “[I’d say to myself] My white bosses just don’t get it… But if I say something again, I’ll be labelled as an overreacting whiner. Or, worse, an angry black man” (p. 129). His vulnerability in passages like these do more to create empathy and solidarity with readers than vitriol ever could.

– Even in the chapter on race and politics, a topic which Gilbreath warns can “get your head bitten off,” (p. 132) he is gentle and winsome, talking about the tension that many black evangelicals feel in supporting either major political party and how blind partisanship can feed the church’s racial divide.

Cons:
– Throughout the book, I had a nagging feeling that something was missing. The chapter on Jesse Jackson crystallized those feelings. Theology is missing, and this omission is the book’s main shortcoming.

– In Chapter 8, Gilbreath discusses Jackson’s history as MLK’s protege, his presidential candidacies, and the various public scandals that marred his career. Throughout the chapter, Gilbreath talks about the discomfort and outright enmity that many white (and some black) evangelicals have towards Jackson. He attributes this animosity to evangelicals’ view that Jackson is an “exemplar of liberal theology and moral compromise” (p. 114). On the other hand, many black evangelicals believe that Jackson has still “got the goods” because of “what he has done for the kingdom of God, what he has done for the achievement of civil rights, what he has done for the human community” (p. 126). What Gilbreath never makes clear is whether he thinks this stance is correct or incorrect.

– This de-emphasis of theology is typical. Despite lengthy descriptions of the ministries of black evangelists, there was little description of what they actually believed. I found myself wondering what “minor doctrinal disagreements” kept black evangelist Tom Skinner from joining more established black evangelicals in New York City (p. 60). Or why an approving mention of pastor Fredrick Price’s willingness to “call racism and social injustice on the carpet” did not elaborate on the fact that Price was also a “top [leader] of the Word-Faith movement” (p. 175) who focused on “prosperity preaching” (p. 176). The final chapter on racial reconciliation included a few names that set off alarm bells, including Shane Claiborne and Bart Campolo (who is now an atheist). The question on how far across the theological spectrum alliances can or should extend is an important one that Gilbreath doesn’t address.

– This absence of theological analysis highlights a major shortcoming of modern evangelicalism – its doctrinal fuzziness. At its best, evangelicalism tries to focus on foundational Christian doctrine while leaving room for disagreement on secondary issues. But in practice, evangelicals often have no clearly articulated theology of these secondary issues and -more often than not- lack a basic understanding of foundational doctrines as well.

– I believe that this lack of precision has a huge effect on the church’s racial divide. Regardless of how we define ‘evangelicalism’ in the sociological sense, in a theological sense, it ought to be grounded in a historic Protestant commitment to the doctrines of the Bible as our ultimate authority. This commitment is what ultimately gives Christianity its transracial, transcultural power. If we water the evangelical church down to some lowest common denominator, it’s no wonder that people see it as a kind of country club which exists to meet their social needs and then gravitate to people of the same race, class, and interests. But if we see it rightly as the people of God committed to each other as family, we have discovered the ultimate source of racial reconciliation and healing.

Summary:
The main lesson I took from this book was one of empathy. Given the racialization of our country and its sordid racial history, whites should be especially open to blacks, learning to listen and recognizing the burdens that blacks often carry. However, blacks and whites are both fallible. None of us sees perfectly and all of us are sinners who need each other to correct our blind spots. Gilbreath realizes this profound truth and offers this book as a first step to seeing things from the perspective of a black evangelical who wants to bring the healing of the gospel to racial divisions.