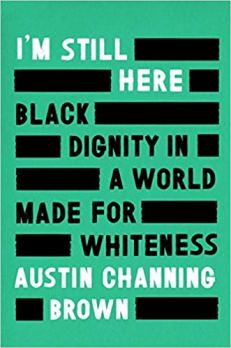 Austin Channing Brown’s I’m Still Here: Black Dignity in a World Made for Whiteness recounts Brown’s experiences as a Black woman in predominantly white spaces, whether evangelical churches, the corporate world, or the U.S. at large. Readers should sympathize with Brown’s perspective, but should also recognize that her perceptions are influenced by her underlying assumptions about race and racism, which may or may not be true.

Like many books by Black authors that include autobiographical elements, I’m Still Here contains numerous incidents that are awkward at best and horrific at worst. It’s understandably draining when white people repeatedly touch Brown’s hair without consent (“in admiration!”) or expect her to explain race to them. It’s frustrating when white students consistently question her competence as a teacher.  It’s far worse to be subjected to racial slurs or fears of violence after racial terrorism, like the shooting at Emanuel AME Church in Charleston that left nine dead.

Whites should not underestimate the toll taken both by overt acts of racial hostility and by the slow drip-drip-dripping of racial insensitivity. Brown is tired and, at times, feels hopeless. Many people of color in predominantly white churches probably sympathize with her emotions.

Some of the racial dynamics that Brown highlights in her book no doubt correspond to real phenomena. For example, she repeatedly laments how conversations about race often “center” white feelings: “[white fragility] ignores the personhood of people of color and instead makes the feelings of whiteness the most important thing… If Black people are dying in the street, we must consult with white feelings before naming the evils of police brutality. If white family members are being racist, we must take Grandpa’s feelings into account before we proclaim our objections to such speech” (p. 89).

Similarly, whites can often excuse racist comments on the grounds that the speaker is “well-intentioned” or a “nice person” (p. 99-112). Or they can whitewash and downplay the horror and lasting significance of slavery, Jim Crow, and other forms of racism (p. 112-118). These dynamics do exist, will prevent genuine dialogue, and can impede repentance from real racism.

Before I can offer a critique, I have to say a word about the reliability of “lived experience”, since so much of the book is rooted in Brown’s experience as a Black woman. While it’s sometimes assumed that any critique of the conclusions drawn from a person’s “lived experience” invalidates their worth as a human being, that’s not the case. A single person’s testimony can indeed be accurate, but that testimony does not necessarily allow us to draw general conclusions about society as a whole.

For example, if “lived experience” is an infallible guide to knowledge about race and racism in the U.S., then what are we to do with the 28% of Blacks who say that they have never “experienced discrimination or been treated unfairly because of [their] race” (see Question 27 here)? Or the 51% of Blacks who say that their race has “not made much difference” to their chance of succeeding in life (see Question 15a here). I’m not arguing here about whose experiences are more accurate: Brown’s or her hypothetical critics. I’m merely arguing that although lived experience can be helpful, it cannot give us infallible insight into social reality.

The biggest problem with Brown’s book is the tremendous asymmetry built into her view of race and racism. For example, in all her discussions of “white fragility,” “white centering,” and “white innocence,” she never acknowledges that these dynamics are universal to the human experience. All of us are inclined to center our own feelings, to look skeptically on experiences that challenge our assumptions, and to portray ourselves in the most favorable light. White fragility, male fragility, Black fragility, and female fragility exist because human fragility exists; these phenomena are by no means unique to whites.

Similarly, Brown laments the ways in which Blacks are saddled with negative stereotypes, yet has no problem with making negative generalizations about whites. For example, her very first chapter is entitled “White People are Exhausting” (p. 11). She writes elsewhere:

“Whiteness constantly polices the expressions of Blackness allowed within its walls” (p. 70).

“Whiteness likes a trickle of Blackness, but only that which can be controlled” (p. 71).

“Whiteness wants us [Blacks] to be empty, malleable, so that it can shape Blackness into whatever is necessary for the white organization’s own success” (p. 79).

“White people really want this to be what reconciliation means: a Black person forgiving them for one racist sin” (p. 110).

“The white Church considers power its birthright rather than its curse” (p. 167).

At one point, Brown even tells a remarkable story of a trip that she took to a former plantation for the purpose of exploring Black history. A Black senior stood up in the middle of the trip and addressed the busload of white and Black students, saying: “I just want to say that I’m having a hard time even being mad at you white people anymore. I think I’ve just been convinced that white people are innately evil. You can’t help it. You steal and kill, you enslave and lynch. You are just evil.” Brown writes: “The white students hadn’t appreciated her words, but the Black students could have kissed her feet… she had spoken her truth” (p. 57).

While it’s not entirely clear whether Brown endorses the student’s actions or thoughts, she certainly doesn’t repudiate them. Later in the book, she even seems to praise them as a positive example of a Black woman who “state[d] her rage with clarity and calm” (p. 124-125).

Presumably, if the roles were reversed and “Blackness” or “Black people” or “the Black Church” were spoken of in these terms, most people would be horrified. Yet the book is suffused with this kind of language. To understand why, it helps to understand Brown’s basic outlook on what racism is and how racial reconciliation is to be accomplished.

With respect to the nature of racism, I’ll quote an important section of Brown’s book at length, because I think it shows Brown’s views clearly. She writes:

“In my experience, white people who believe they are safe often prove dangerous when that identity is challenged. This is in part because most white people still believe that they are good and the true racists are easy to spot… I don’t know where this belief comes from, but I do know it has consequences. When you believe niceness disproves the presence of racism, it’s easy to start believing bigotry is rare, and that the label racist should be applied only to mean-spirited, intentional acts of discrimination. The problem with this framework –besides being a gross misunderstanding of how racism operates in systems and structures enabled by nice people— is that it obligates me to be nice in return, rather than truthful. I am expected to come closer to the racist. Be nicer to them. Coddle them.” (p. 101)

And a few pages later:

Second, with respect to the nature of racial reconciliation, Brown cautions readers that “Racial reconciliation has become something of a buzzword in Christian circles [but is not] just a churchy-sounding catchall for any kind of diversity effort” (p. 165). In particular, according to Brown, “reconciliation is not a fancy word for any of the following:

Readers may be somewhat confused at this point. If a 1) multiethnic church that 2) has lots of members of all ethnicities presumably worshipping together in harmony, and that 3) has people of color and women on the leadership team, and that 4) regularly celebrates different ethnicities can still be failing to accomplish the mission of reconciliation, then what exactly does “reconciliation” mean?

Here Brown quotes DeYoung and Boesak who write that “‘reconciliation is revolutionary, that is, oriented to structural change‘” (p. 167). She comments that

“reconciliation can never be apolitical. Reconciliation chooses sides, and the side is always justice. This is why white American churches remain so far from experiencing anything that resembles reconciliation… rather than seeking reconciliation, they stage moments of racial harmony that doesn’t challenge the status quo… since they don’t change the underlying power structure at the organization, it would be misleading to call [these moments] acts of reconciliation” (p. 167-168).

To be even more clear, Brown writes later that “dialogue is only productive towards reconciliation …when it inverts power and pursues justice for those who are most marginalized” (p. 169) because “reconciliation is… about diverting power and attention to the oppressed, toward the powerless… [it is] the pursuit of the impossible– an upside-down world where those who are powerful have relinquished that power to the margins” (p. 171).

It’s crucial for evangelicals to see that both the problem and the solution offered by Brown are quite different than what we might expect. Racism isn’t primarily about the sins of racial pride or enmity. Rather, it is built into institutional structures and patterns of thought in which kind, compassionate white people are nonetheless complicit. As a result, “racial reconciliation” isn’t primarily about repentance from sin and the restoration of relationships. It is about dismantling and reordering structures of power, even those within the church.

I will leave it to readers to decide whether they agree with Brown’s vision of racism and racial reconciliation. For now, it’s enough to observe that they undeniably permeate her book and her interpretation of her experiences. While we can all learn from her stories, those of us who fundamentally disagree with her understanding of racism and reconciliation ought to be hesitant to adopt her prescriptions for the church, on the grounds that they are far more likely to destroy attempts at racial unity than to advance them.