In the last few years, I’ve frequently seen the claim that “the Bible was written from the perspective of the marginalized” 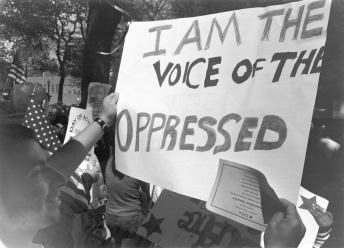 or that “all the biblical authors wrote from the social location of the oppressed” or that “the writers of the Bible were colonized or under threat of colonization.” In this essay, I’d like to ask two questions: first, are these claims true? And second, what’s the significance of these claims?

Were all the biblical authors oppressed?

The definition of terms like “marginalized,” “oppression,” and “colonized” can be somewhat ambiguous. However, let’s consider whether these claims are true given even the most generous definitions.

Assuming traditional authorship of the books of the Bible, it is certainly fair to say that many of them were written by authors belonging to oppressed groups. For example, the authors of the New Testament -with the possible exception of Luke- were all Jews who had been subjugated by a foreign, imperial power. Granted, Paul was himself a Roman citizen, an educated man, and a student of the renowned rabbi Gamaliel. Yet it’s not too much of a stretch to say that he belonged to an oppressed people. Similarly, although Moses received the education and benefits of an Egyptian prince, he identified with his fellow Israelites, who were brutally enslaved.

However, it’s much harder to make the case that all the biblical authors fit into the category of ‘marginalized.’ For instance, David, the author of many of the Psalms, was persecuted by King Saul as a young man but eventually ascended to the throne and came to enjoy immense power and privilege. David’s son Solomon was the richest man in the world at the time. He significantly expanded the Israelite nation through conquest, and -infamously- took hundreds of wives and concubines. Despite this fact, he is the traditional author of the book of Ecclessiastes and the majority of the book of Proverbs. The author of the book of Job is unknown, but the book’s protagonist was not an Israelite and was also very wealthy. Similarly, some of the prophets -like Isaiah- enjoyed social status as priests or as advisers to the king. Finally, the book of Joshua recounts Israel’s conquest of the land of Canaan. While this narrative needs to be considered against the backdrop of Canaanite sin, Israelite exodus from slavery, and God’s promises, most people do not have a conquering, victorious army in mind when they think of the Israelites as ‘oppressed, marginalized, and colonized.’

These exceptions are sufficient to contradict the claim that the biblical authors were universally ‘oppressed’ or marginalized’, but one other factor is important. Many of the Israelite prophets preached against the violence, materialism, and idolatry of the Israelites themselves. While this observation reinforces God’s concern for justice, it also undercuts the idea that the Israelites can be viewed as a monolithic “oppressed” or “marginalized” group. The Israelites included both oppressed and oppressors, both the just and the unjust. The prophet’s denunciations of injustice function as arguments against treating a particular racial, ethnic, or demographic group as a uniformly marginalized of oppressed. The Bible draws lines not primarily between genders or socioeconomic classes or ethnic groups but between those who are faithful to God and those who reject him.

What is the significance of an author’s “oppressed” status?

The importance of the biblical authors’ social location is tied to the growing acceptance of the ideology of critical theory. A key element of critical theory is the belief that one’s status as an oppressed person gives one special access to truth that is unavailable to oppressors. Moreover, privileged people are blinded by their power; they don’t realize that they are unable to see the truth. Consequently, a privileged person should defer to the claims of the oppressed person due to the greater insight that they inherently possess.

There is, of course, some truth to the claim that our social location can aid or impair our ability to interpret evidence in general or Scripture in particular. But as an overarching approach to the Bible, the claims of critical theory are problematic.

Second, to insist that ‘social location’ is an essential factor in biblical interpretation is to flirt with a gnostic approach to the Bible. If we adopt this approach, how can a person from a privileged group question the interpretations of a marginalized person? Isn’t his role to simply listen and accept the statements of those whose spiritual authority is vouchsafed by their lived experience of oppression? This is a dangerous position because it cuts off the possibility of rational discussion or disagreement. At the end of the day, we have to appeal to biblical arguments to show that our claims are true; we can’t merely appeal to our group identity.

Finally, the supposed affinity between the social location of the biblical authors and subordinate groups today is tenuous, at best. To claim that a college-educated middle-class American woman raised in the suburbs has deep insight into the experiences of poor, illiterate Hebrew slaves fleeing the Egyptian empire because both are ‘oppressed’ is highly implausible.

It is not true that all of the biblical authors were marginalized/oppressed/colonized. More importantly, the Bible doesn’t see ‘social location’ as the central factor in accurate interpretation. Finally, it is not primarily someone’s identity as part of an ‘oppressed’ or ‘oppressor’ group but God’s guidance through the indwelling Holy Spirit that gives them insight into Scripture. Let’s be humble and cognizant of our own biases and blindspots. But let’s not let group identity trump reason and careful exegesis.