Three weeks ago, Brad ended our discussion of critical theory. Several days later, he began emailing scholars in an attempt to assess whether my claims were correct. I have no problem with this action. However, when I read excerpts from the email he sent and the scholars’ responses, two things stood out.

First, the email contained several mistakes that could (and did) lead to a misunderstanding of my position. I’ve already discussed how serious these errors were elsewhere, so I won’t belabor the point here.

Second, I noticed that some important context seemed to be missing. For example, several scholars seemed to have answered questions that weren’t asked or made comments that were grossly inappropriate (such as Prof. McIntosh’s suggestion that I was motivated by ‘veiled racism’).

Given this discrepancy, I asked Brad to post his email in its entirety. In his next article, Brad posted excerpts from the email, but not the full email. He wrote that he’d sent “each [scholar] the identical simple email [that follows]… With occasional modification in salutations and deletion of ‘you yourself have been cited…’ if not applicable.” He later posted these excerpts with the description “The emails:” When I and others asked Brad repeatedly to paste the full emails (see 1, 2, 3, 4, 5, 6, 7, 8, etc…), he repeatedly declined. He said that these requests were a “distraction,” a “silly tack,” and were “grasping at straws.” He insisted that he had posted the full email “except intros and thank yous.” 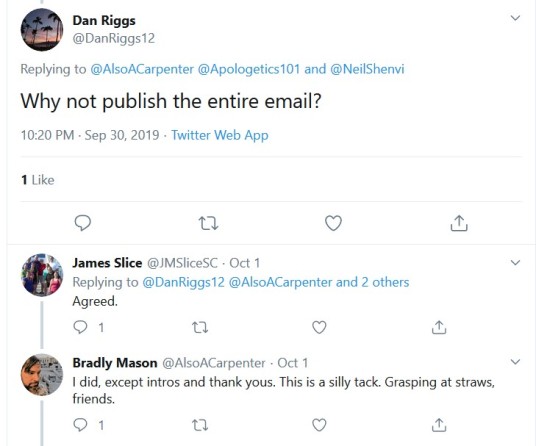 I have now obtained the full text that he sent, and these statements were not true. While Brad released the majority of his email, he left out at least two relevant sections. I’d like to focus on the second section that he omitted. Brad’s original email included the following three sentences, which occur after the section he posted and before a separate paragraph offering his thanks:

“If you are in fact willing to offer your welcomed expertise on this matter, would you likewise allow your answer to be shared? I will, of course, profit in no way from the use, except to further the cause of antiracism. I will also be careful to link to your works for purchase along with citation.” 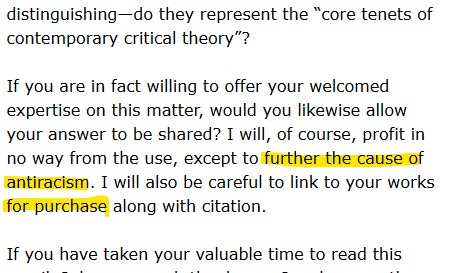 In addition to the mistakes that Brad’s email contained, I believe that this omitted portion helps to explain at least some of the scholars’ negative reactions. Brad affirms that he will use the scholars’ comments to “further the cause of antiracism.” Given this affirmation, McIntosh’s suggestion that I am motivated by ‘veiled racism’ makes more sense: who would debate an antiracist if not a racist?

Moreover, while I doubt that a scholar’s objectivity would be diminished by a desire to sell books, Brad should have mentioned that he made the promise to post links to their works “for purchase,” especially since he insisted that only “intros and thank yous” had been omitted.

Although Brad has affirmed that all of the emails he sent were basically identical, I hope he will post them all in their entirety along with the responses in their entirety, so that we can judge for ourselves whether any of the information he omitted is relevant.

Now, to be clear, even the full email doesn’t address the question of whether my characterization of “contemporary critical theory” was correct. With regard to this point, I’ll make three observations:

First, note that when I clarified my claims to Prof. Stephen Bronner, he withdrew his criticism and said that my characterization ‘makes sense.’ Similarly, Dr. Pat Sawyer and I have collaborated on numerous articles and he affirmed that my summaries are “accurate characterizations of the CT [Neil is] challenging.” Dr. Sawyer is -as far as I know- the only evangelical Christian with a PhD in a relevant field (Education and Cultural Studies) who is writing regularly about these issues. He teaches courses at the university level designed to unpack social justice concerns in which he uses the texts of many of the authors in question. Consequently, his expert opinion carries weight.

Second, Prof. McIntosh was seemingly confused by Brad’s email, just as Prof. Bronner was. In the excerpt Brad posted, she doesn’t mention “contemporary critical theory” even once, but refers to “critical race theory” five times, despite the fact that this is a term I mentioned as a phrase that other people (incorrectly, but very commonly) use to label these ideas. This understandable mistake once again shows that Brad’s email did not properly represent my position.

Finally, despite their negative comments, none of the scholars that Brad has emailed has said anything that contradicts my four tenets. If these tenets truly are a caricature, someone should explain precisely how they misrepresent the actual beliefs of contemporary critical theorists. These scholars may indeed have very specific and lucid objections. But if they do, they’ll have to state them explicitly.

Here, I’ll reiterate my willingness to engage in further dialogue. Like all academic disputes, this one can’t be settled by bare appeals to authority. Instead, we’ll have to make careful arguments that cite primary sources, many of which I reviewed on my website. If anyone thinks I’m misunderstanding the basic claims made by these sources, I’d be happy to engage. However, engagement is best served by a two-way dialogue, not a one-way monologue in which one party’s opinion is solicited without any opportunity for response.

Brad, I understand that you don’t want to participate in a podcast where both of us can present our views and answer each others’ questions. However, if that’s the case, then it’s unreasonable to continue sending scholars an inaccurate email, posting their responses, refusing to share the full text of the email, making false claims about its contents, publicly stating that I am “misleading folks ” and that my work “helps give cover to racism,” and then refusing to engage in dialogue. That approach is neither charitable nor edifying to people reading these remarks. Please stop.

Finally, if anyone is still skeptical that my characterization of contemporary critical theory is accurate, I urge you to read the primary sources for yourselves. Don’t take my word for it. Don’t take Dr. Sawyer’s word for it. Read Sensoy and DiAngelo’s Is Everyone Really Equal? Read McIntosh’s “White Privilege”. Read Adams’ Readings for Diversity and Social Justice. Read Crenshaw’s Critical Race Theory. Read Wilchins’ Queer Theory, Gender Theory. Just read the figure below:

Many evangelicals are not only hesitant to reject these ideas, but are even explicitly embracing them. They don’t recognize how these ideas will wreck their theology until it’s too late. I’ve watched it happen over and over to people I know and love. No matter who you are, don’t let your commitment to your political tribe override your commitment to Scripture. We don’t have to choose between embracing critical theory and embracing injustice. We can reject both.