Queer theory is a discipline situated within the broad intellectual tradition of critical theory. 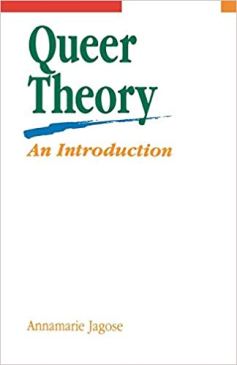 Queer theory aims to disrupt the gender binary of male/female, showing that these categories are socially constructed. Yet, surprisingly, Annemarie Jagose spent a significant fraction of her book Queer Theory: An Introduction explaining the historical antecedents and political relevance of Queer Theory, rather than elucidating its theoretical underpinnings. Nonetheless, her work does provide a helpful overview of the movement, its points of agreement, and its internal debates. Below are a selection of notable quotes:

“Taking a constructionist line [i.e. that the category of ‘homosexual’ is a social construct], Foucault argues that homosexuality is necessarily a modern formation because, while there were previously same-sex acts, there was no corresponding category of identification.” (p. 10)

“[Foucault argues that] After 1870 same-sex acts began to be read as evidence of a particular type of person about whom explanatory narratives began to be formed: ‘The sodomite had been a temporary aberration; the homosexual was now a species’ (ibid.).” (p. 11)

“Following a Marxist analysis of class oppression, early discussion papers theorized homosexuals as a population unaware of its status as ‘a social minority imprisoned within a dominant culture’… The Mattachine Society’s political task was to foster a collective identity among homosexuals who, recognizing the institutional and hegemonic investments in their continued marginalisation, might consequently be energised and enabled to fight against their oppression.’ (p. 24-25)

“The founders [of the Mattachine Society] continued to represent homosexuals as a minority group oppressed by the dominant culture” (p. 25-26).

“No longer content to solicit tolerance and acceptance, more radical groups began to model themselves on New Left social movements and to critique the structures and values of heterosexual dominance” (p. 31)

“[Gay liberationists] indicated that bay liberation was not a single-issue struggle and that it could make sense only within an analytic framework capable of dealing with different forms of oppression. ‘Gay liberation’, writes Allen Young (1992:25-6), ‘also has a perspective for revolution based on the unity of all oppressed people–that is, there can be no freedom for gays in a society which enslaves others through male supremacy, racism and economic exploitation (capitalism)’.” (p. 34)

“Homosexuality was represented as an identity repressed by heterosexist power structures which privilege gender-asymmetry, sexual reproduction and the patriarchal nuclear family.” (p. 36)

“Instead of trying (as homophile organizations had done) to persuade psychiatrists to adopt more liberal and less pathological understandings of homosexuality, gay liberationists spoke out against such ‘expert’ opinions, and insisted that their personal experiences be recognizes as authoritative.” (p. 37)

“the logics of coming out assume that homosexuality is not simply a private aspect of the individual, relevant only to friends and colleagues. Instead, it is potentially a transformative identity that must be avowed publicly until it is not longer a shameful secret but a legitimately recognised way of being in the world.” (p. 38)

“gay liberation understood that the marginalization and devaluation of homosexuality was effected by that dominant and rigidly hierarchical conceptualisation of sex and gender which constituted the social norm. In order to liberate homosexuality, gay liberation was committed to eradicating fixed notions of femininity and masculinity: that move would similarly liberate any other groups oppressed by what it critiqued as normative sex and gender roles.” (p. 41)

“Once gender is theorised as an oppressive system of classification, both heterosexuality and homosexuality come to be understood as merely ‘artificial categories’ (Young; 1992:29)” (p. 42)

“a paper [entitled] ‘The Woman-Identified Woman’… deflects attention from lesbianism as a sexual orientation or practice in order to reconceptualise it as a way of being in the world that, potentially, includes all women. The perspective gained from lesbian experience – ‘the liberation of self, the inner peace, the real love of self and of all women’ – is in the words of the Radicalesbians… ‘something to be shared with all women – because we are all women.'” (p. 47-48)

“‘Compulsory heterosexuality’ is also, of course, a key idea for [Adrienne] Rich, who coined the phrase. Unlike Frye, however, she considers the effect of this regulatory order principally as it pertains to women, identifying heterosexuality as ‘a political institution‘ which systematically works to the disadvantage of all women.. In comparing heterosexuality to capitalism and racism, she represents it as structured across a fundamental imbalance of power.” (p. 53-54)

“[Barbara Smith writes:] It was simply not possible for any oppressed people, including lesbians and gay men, to achieve freedom under this system… Nobody sane would want any part of the established order. It was the system–the white supremacist, misogynistic, capitalistic and homophobic–that had made our lives so hard to begin with. We wanted something entirely new.” (p. 67)

“debates in lesbian and gay circles during the late 1970s and early 1980s about bisexuality, sado-masochism, pornography, butch/fem, transvestism, prostitution and intergenerational sex, implicitly questioned the hegemonic binarism of ‘heterosexuality’ and ‘homosexuality.'” (p. 64)

“Variously referred to as intergenerational sex, child abuse, man-boy love and paedophilia, even the semantic continuum of terms used to describe the concept evokes a variety of positions in a debate structured overwhelmingly by such issues as consent, power and the legal definition of childhood… the issue of intergenerational sex continues to be debated vigorously in many gay and lesbian communities. The protection of children is deemed by some to be ethically crucial to the development of gay identity, but is dismissed as others ‘erotic hysteria’ (Rubin, 1993:6). What is the status of different, and arbitrary, age-of-consent laws? Do children have a sexuality and a right to sexual agency? Why is age –unlike, say, race or class– understood as a sexualized power-differential protected by law? Is it possible to eroticise children in an ethical way? These are the questions commonly raised–and by no means yet resolved– in the controversy over intergenerational sex” (p. 70-71)

“ideology not only positions individuals in society but also confers on them their sense of identity. In other words, it shows how one’s identity is already constituted by ideology itself rather than simply by resistance to it” (p. 78)

“Although [Judith Butler’s] Gender Trouble is framed most prominently in terms of feminism, one of its most influential achievements is to specify how gender operates as a regulatory construct that privileges heterosexuality and, furthermore, how the deconstruction of normative models of gender legitimates lesbian and gay subject-positions” (p 83)

“For Butler (1991: 13-14), ‘identity categories tend to be instruments of regulatory regimes, whether as the normalizing categories of oppressive structures or as the rallying points for a liberatory contestation of that very oppression.'” (p. 91)

“[Sedgwick writes] that queer is being spun outward ‘along dimensions that can’t be subsumed under gender and sexuality at all: the ways that race, ethnicity, postcolonial nationality criss-cross with these and other identity-constituting, identity-fracturing discourses, for example’.” (p. 99)

“what is being critiqued in contemporary theory is the very notion of the natural, the obvious, and the taken-for-granted. ‘The appeals to so-called “common sense,” writes Lee Edelman (1994:xviii) “reinforces the hypostatization [reification] of the ‘natural’ upon which homophobia relies and thus partakes of an ideological labor complicit with heterosexual supremacy”. To valorise common sense is naive, if not dangerous… the convergence of knowledge and common sense may be understood more profitably as licensing the operation of unexamined ideological structures.” (p. 103)

“[Cherry Smith writes:] ‘While queer raises the possibility of dealing with complex subjectivities and differences in terms of gender, race and class, it also risks not trying hard enough to resist the reductive prescriptiveness some of us suffered in feminism and the uncritical essentialism that privileges the queerness of gay white men.’ (p. 118)