A month ago, Bradly Mason and I started a friendly blog exchange over the question: “Is critical theory a threat to evangelicalism?” 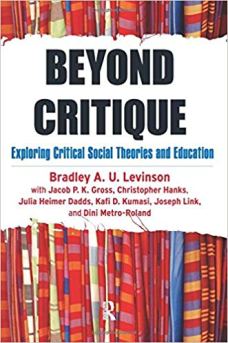 In my first post, I specified that there were many critical theories, but that I was concerned about an ideology that I designated with the label ‘contemporary critical theory,’ which is characterized by four central tenets revolving around oppression and liberation. I emphasized that I was not attempting to characterize all critical social theories, but was summarizing a coherent ideology articulated by well-known contemporary scholars like Robin DiAngelo, Eduardo Bonilla-Silva, and Peggy McIntosh, among many others. I also stressed that the label we use is less important than the ideas themselves and that -for the sake of argument- I’d be happy to employ another label like “critical social justice.”

Unfortunately, Brad declined to say whether these ideas were biblical or whether he agreed with statements made by prominent Christians like “Christ is our Black Mother” or “all whites are racist,” which are being underwritten by these ideas. After five exchanges, Brad ended our discussion a week-and-a-half ago, saying that he had to devote time to other projects.

Consequently, I was surprised when Brad unexpectedly reopened this topic on Thursday by sharing an email exchange that he had with Dr. Bradley Levinson, a Professor of Education at Indiana University who has written an excellent book on critical theory.

I was even more surprised that Dr. Levinson stated that my four tenets read “as caricature” and that they “carry minor grains of truth, [but] simplify and obscure.” Given that I provided quotes from DiAngelo, Adams, and others clearly affirming these ideas and given that I’ve provided numerous book reviews on my website showing how these ideas are indeed promoted by critical theorists, I didn’t understand in what sense they could be considered a “caricature.” Consequently, I’d like to examine Dr. Levinson’s response in some detail.

What struck me most about Dr. Levinson’s discussion of my four points was that he doesn’t explicitly say that any of them are false. He elaborates on them, but doesn’t contradict them. And he repeatedly says that these particular ideas as stated are indeed promoted by some contemporary critical theorists, which is exactly what I’ve argued. I’ll examine each of his responses in turn:

Dr. Levinson states that intersectionality complicates our understanding of oppression. And of course, that’s true. But the concept of intersectionality doesn’t undermine or reverse the social binary, which is why it was featured so prominently in the figures I cited from DiAngelo and Adams (see below). Similarly, the fluidity of these categories doesn’t mean that dominant/subordinate categories don’t exist at all. 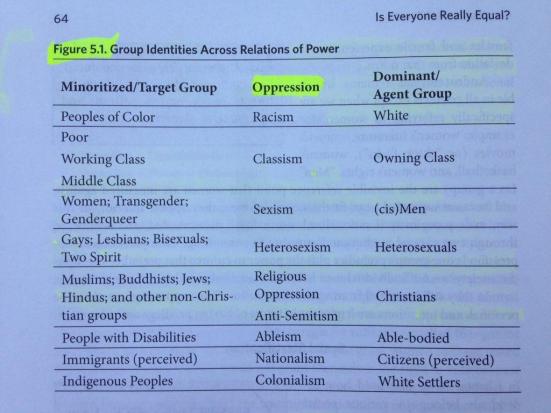 Moreover, Dr. Levinson goes on to affirm that “some contemporary versions of feminism or critical race theory indulge in fairly rigid categorical thinking.” But if that’s the case, then wouldn’t I be correct in seeing a social binary in critical race theorists like DiAngelo or feminists like McIntosh?

Oppression is not defined only in terms of violence, but in terms of dominant groups (whites, the rich, men, heterosexuals, Christians, etc…) imposing their values on subordinate groups (people of color, the poor, women, LGBTQ+ individuals, non-Christians, etc…).

Dr. Levinson affirms that critical theories recognize “ideological dimensions of domination and injustice” which would include overt acts of violence along with “educational gestures” that reproduce self-hatred. However, he cautions that: “any complete critical theory of justice acknowledges the spectrum of forces of domination.”

Again, I see no contradiction here with what I wrote, since I state that within contemporary critical theory, “Oppression is not defined only in terms of violence” (see Young’s “Five Faces of Oppression” or Frye’s “Oppression”). Liberals, conservatives, Christians, Muslims, and critical theorists, all agree that sex trafficking or slave labor constitutes oppression. However, they disagree over whether educational gestures and ideologies also constitute oppression, which was the point I made in tenet 2.

We should expose and dismantle the values and structures of dominant groups. Racism, classism, sexism, homophobia, ableism, and transphobia are all forms of oppression that must be dismantled.

Dr. Levinson’s response to my third point begins with a statement of agreement: “OK, more or less.” He adds that critical theorists believe that dismantling oppressive ideologies (like racism or heterosexism or cis-gender normativity) will lead to freedom for all. Again, I agree, but this addition doesn’t contradict my claim. Critical theorists are committed to dismantling these ideologies, just as I said, even if they see this act as a universally liberatory endeavor.

‘Social location’ determines our access to truth. In particular, oppressed people have special access to the truth through their lived experience, while members of oppressor groups are blinded by their privilege.

Finally, on the fourth point, Dr. Levinson argues that I’ve described a “strong” version of standpoint epistemology rather than the “weaker” version adopted by most critical theorists, which allows for the possibility that oppressors can correct their blindness “through humility, self-reflection, and education.”

First, I’d note that he agrees that some critical theorists do indeed adopt a “strong” version of standpoint epistemology.

But second, I didn’t claim that critical theorists believe that the blindness of oppressor groups can’t be corrected; they merely believe that blindness is the state into which oppressor groups are socialized such that they have less access to truth and will have to work harder to discover it, often by listening to oppressed groups.

But if he hasn’t claimed that these ideas are false, what is the source of our disagreement? I think there are two possibilities.

First, Dr. Levinson may disagree that these four ideas are an accurate characterization of the work of scholars like DiAngelo, Bonilla-Silva, Adams, McIntosh, Collins, Crenshaw, or others. If so, I’m curious to know how I’ve misinterpreted the various works I cited. Does Sensoy or Adams reject the social binary? Does DiAngelo or Medina not believe that oppressor groups are socialized into blindness? I’m open to discussion.

Second, Dr. Levinson may agree that these four ideas accurately characterize a coherent ideology shared by these scholars, but may object to the term “contemporary critical theory” since not all critical theorists agree to these claims. Of course, I absolutely agree that not all critical theorists accept these claims; Horkheimer and Adorno were not primarily concerned with gender identity! Instead, I’m merely trying to distill the core beliefs of the scholars I mentioned and those of a similar persuasion, who are dominating contemporary discourse and are being cited heavily by evangelicals.

Regardless, I’d be happy to engage with Dr. Levinson on this subject, either via email or the medium of his choice. And if Brad would like to continue our dialogue, he can pick up where we left off, explaining whether he thinks these four ideas are biblical and whether he thinks the statements I cited from prominent Christians are true.