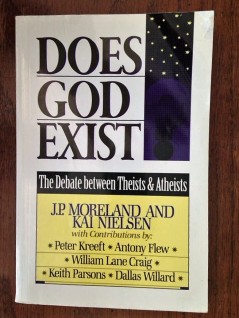 Does God Exist? is the transcript of a debate between Christian J.P. Moreland and atheist Kai Nielsen, followed by commentary by four other eminent philosophers (Craig, Willard, Flew, Parsons) and final summaries by the participants.

– Exceptionally balanced. Three Christians and three atheists, in addition to an introduction and conclusion by Christian philosopher Peter Kreeft.
– With the possible exception of Parsons, good choice of contributors.
– Format gave plenty of opportunity for interaction and disagreement. Anyone can sound very convincing as a monologue, which is why it’s so important to listen to a genuine dialogue where both sides are represented
– The interaction was mostly civil

– Moreland and Nielsen occasionally lapsed into ‘philosopher-speak’, using highly technical jargon and curt citations without any explanation. This mainly happened during rebuttals and is understandable, but is not helpful in a public debate designed for laypeople
– Nielsen seemed to lose it in his final summary, complaining incessantly about being misrepresented and misunderstood. He also admitted that he “hardly had a debating strategy in mind” (p. 249) and said that in order to understand his real argument, you really need to read his books. Yeah, that’s not how debates work.

While Moreland presented several arguments for God’s existence (teleology in nature, the origin of the universe, and the Resurrection of Jesus), Nielsen’s sole contention was that the word “God” is “incoherent.” Even the atheist commenters seemed to agree that Nielsen provided little justification for this claim. Moreland could have done better in choosing and presenting his positive arguments, but gave very solid and perhaps conclusive rebuttals to Nielsen.

Atheist Antony Flew provides what I think is a good summary: “Kai Nielsen chose as his main line of attack the contention that … theism is incoherent [which was] a bold strategic choice. But to go ahead on this line of reasoning without first taking great care to show how [this] term [is] ultimately incoherent, was no so much bold as reckless.” (p. 165)