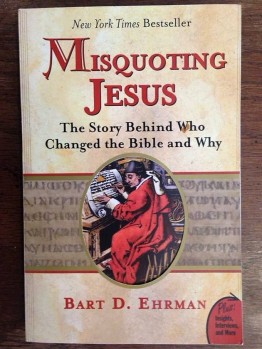 Bart Ehrman’s Misquoting Jesus: The Story Behind Who Changed the Bible and Why is a popular summary of New Testament textual scholarship; that is, how does the text of modern English Bibles relate to the original documents written two thousands years ago by Luke, Paul, etc… ?

Pros:
– Very enjoyable. Ehrman has an knack for making dry, academic material interesting.
– Provides a good historical overview of textual criticism. That’s not surprising. Ehrman gave a similarly engaging historical overview of Jesus scholarship in his “Jesus: Apocalyptic Prophet of the New Millennium”
– Raised a number of textual issues I wasn’t aware of. I have what I think is a fairly good grasp of major textual issues, but several that Ehrman mentioned still surprised me.

Cons:
– As he concedes in the Appendix, Ehrman often gives the impression that the textual issues are more serious than they actually are. For example, he says “If [Bruce Metzger, a renowned Christian scholar] and I were put in a room and asked to hammer out a consensus statement on what we think the original text of the New Testament probably looked like, there would be very few points of disagreement – maybe one or two dozen places out of many thousands” (p. 252). He also affirms, with Metzger, that “essential Christian beliefs are not affected by textual variants.” (p. 252) I would have preferred if these important points were mentioned in the book’s text, rather than in an Appendix.
– Ehrman doesn’t mention that most of the variants he discusses are explicitly footnoted in modern Bible translations, even my $1 ESV New Testament. Granted, most Christians probably don’t think much about these variants. But that merely shows that Christians (like most people) don’t read footnotes. Shame on us!
– Ehrman tends to exaggerate the theological importance of variants. Even granting his reading of particular texts, I occasionally had trouble seeing why he thought they had substantial theological consequences. For example, he makes a major issue of the fact that Jesus may have been filled with ‘anger’ rather than ‘compassion’ in Mark 1:41. While this variant is certainly strange (which is why many translations don’t adopt it), does it really affect our view of Jesus, who displays both anger and compassion at other points in Mark’s gospel?
– Perhaps the biggest omission in the book was a comparison of NT textual variation to the variation we find in other ancient manuscripts. If someone asks “Can we trust the text of the NT?” we should reply “Compared to what?” Ehrman repeatedly notes that our 5,000+ NT manuscripts are filled with textual variants and often date to centuries after their composition. But he says nothing about other ancient works. How do these numbers compare to the Iliad? Or to Josephus? He doesn’t say. In fact, the NT is by far the best attested book in antiquity. Ehrman should have made some reference to this fact, lest his readers get the impression that the NT is substantially less reliable than other ancient works.

Summary:
Overall, a good book. But if this is someone’s only exposure to textual criticism, it would be worth listening to a counterpoint. Peter Williams, an evangelical textual critic at Cambridge, had a great discussion of this book with Ehrman on the radio program “Unbelievable” that fits the bill quite nicely.