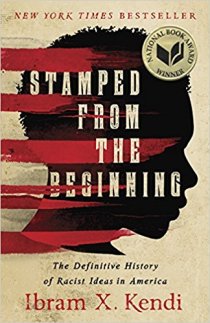 is ambitious as its subtitle suggests. Kendi’s text provides a good overview of the origins and evolution of racism in the United States, but suffers from numerous flaws, both in its ideology and in areas of basic scholarship.

Before continuing, let me offer a warning. Readers of this review may make one of two opposite errors.

First, they may conclude -based on the critique I offer- that racism does not exist or that all claims of racism are groundless. This inference would be completely unwarranted. Racism does indeed exist and it is a grievous evil. For those unfamiliar with the extensive data supporting the existence of present-day racial discrimination, I recommend this overview.

Alternatively, readers may so strongly support the cause of antiracism that they disregard the criticisms I make. This attitude would also be mistaken. We must never be so committed to an ideology that we’re unwilling to critique its proponents.

– The book’s sweeping scope provides a sense of how large a role slavery and racism played in our country’s founding and in its institutions. The simplified, rosy-colored version of history that I learned in school usually failed to capture the horrors that have been perpetrated by our nation’s government and its citizens. If you’re in a similar position, it’s worth reading books like this one.

– Kendi’s use of primary sources highlights the unabashed racism that was present both in the general populace and in the government.  The book takes its title from Confederate President Jefferson Davis’ declaration that “This Government was founded not by negroes nor for negroes,’ … but ‘by white men and for white men.’ … The ‘inequality of the white and black races’ was ‘stamped from the beginning'” (p. 208-209). But the book is replete with other examples, like the statement of South Carolina senator Ben ‘Pitchfork’ Tillman who said of President Theodore Roosevelt’s White House dinner with Booker T. Washington: ‘The action of President Roosevelt in entertaining that n—– will necessitate our killing a thousand n—–s in the South before they will learn their place again.'” (p. 291)  Or Mississippi senator Theodore Bilbo’s proclamation: “I call on every red-blooded white man to use any means to keep the n—–s away from the polls.” (p. 352) In an era where few people are willing to vocalize comments like these, it’s important to remember that they were once common on the lips of our elected officials.

– Kendi’s willingness to expose the clay feet of historical heroes like Abraham Lincoln, Elizabeth Cady Stanton, or Susan B. Anthony is a sobering reminder that even morally courageous and sensitive people are often blinkered by their social context.  Likewise, he calls attention to the hypocrisy of figures like Thomas Jefferson: “Amalgamation with the other color, produces degredation to which no lover of his country, no lover of excellence in the human character, can innocently consent,’ [Jefferson] wrote in 1814, after he had fathered several biracial children.” (p. 118)

– In other words, Kendi regards both segregationists and assimilationists as ‘racists.’  Only antiracist ideas are non-racist. He again clarifies exactly what qualifies as a ‘racist’ idea in several places:

I am not saying all individuals who happen to identify as Black (or White or Latino/a or Asian or Native American) are equal in all ways. I am saying that there is nothing wrong with Black people as a group, or with any other racial group. That is what it truly means to think as an antiracist: to think there is nothing wrong with Black people, to think that racial groups are equal…All cultures, in all their behavioral difference, are on the same level. Black Americans’ history of oppression has made Black opportunities – not Black people- inferior. (p. 11)

– Kendi is willing to deviate from standard antiracist terminology. For example, he insists that racist ideas can be believed by people of any race, not just whites: “Racist ideas are ideas. Anyone can produce them or consume them… White, Latina/os, Blacks, Asians, Native Americans – anyone can express the idea that black people are inferior, that something is wrong with black people.” (p. 10). Throughout the book, he talks about prominent Blacks who held racist ideas and even refers twice to “Black racists” (p. 215, p. 474).

– Finally, the book was full of facts and little-known historical episodes which caught me by surprise. For example, I didn’t realize that the scare over “crack babies” in the 1990s had failed to materialize in long-term studies. Or that the birth-rate of unmarried Black women has steadily decreased since the 1960s.

Initially, I had expected that I would find much to appreciate in this book (which I did), and that I would disagree with it mainly on ideological grounds. However, that was not the case. My greatest concern came from the many glaring factual errors that Kendi makes throughout the book. I’ll turn to these next.